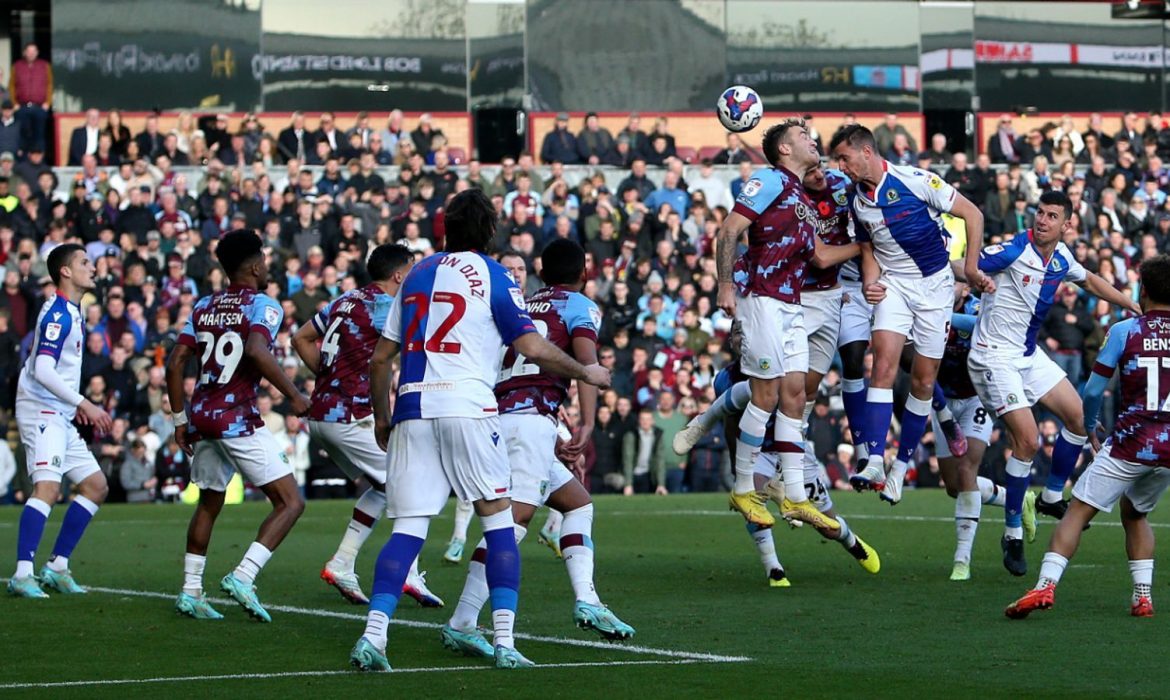 After back-to-back victories against Huddersfield Town and West Ham United, Jon Dahl Tomasson made 10 changes to the side that won in the Carabao Cup on penalties, after a 2-2 draw. Only Clinton Mola survived from the cup winning side, but Sam Szmodics was unable to make the matchday squad as he was ruled out with a tight hamstring. Thomas Kaminski was behind a presumed back-four of Callum Brittain, Dominic Hyam, Daniel Ayala and Clinton Mola. Jake Garrett and Tyler Morton were alongside captain, Lewis Travis, whilst Ryan Hedges, Sam Gallagher and Ben Brereton Díaz – who was making his 150th Rovers appearance – led the line for the Blues.

With Sky Sports giving it their usual hype, there was a moment of silence on Remembrance Sunday, despite the hostile atmosphere, before David Coote got the game underway to a roar as the home side got the ball rolling.

The game started very quickly as Josh Brownhill fashioned the game’s first chance for the hosts, as he tried to find Ashley Barnes with a low cross, but Rovers managed to turn the ball behind for a corner, which the visitors cleared easily.

Despite being a fiery local derby, Burnley held most of the possession and began to try and probe Rovers for an opening, but the game lacked any real opportunity that tested either Thomas Kaminski or Arijanet Muric.

The 22nd minute saw the Rovers fans scream for a penalty as Ben Brereton Díaz was seemingly shoved on the edge of the area after latching onto a long-ball, but the calls were waved away by David Coote.

Manuel Benson cut inside and tried to curl one in, in the 31st minute, but Kaminski was there to easily gather the ball.

In the 42nd minute, the first booking surprisingly came later than expected as Lewis Travis was cautioned after fouling Vitinho.

The set piece saw Kaminski spring into action as he pulled off a brilliant save to deny former Rover, Taylor Harwood-Bellis. After a penalty appeal was waved away on Ben Brereton Díaz, Burnley recycled possession as the ball was lofted into Harwood-Bellis who connected with a header towards goal, but saw his effort denied by a Premier League-quality save from the Belgian goalie. The save earnt the hosts a corner, which again saw Kaminski under-pressure to produce a game-saving save, as another header, this time from Josh Cullen saw the Rovers shot-stopper tip the ball over the bar.

After three minutes of added time, the break soon came as the tie remained finely poised in the balance, waiting for a hero to emerge within the ranks of either team.

Vincent Kompany would’ve been pleased with how his side had kept their rivals pressured and pinned back, but would have been angling for more bite in-front of goal. After testing Kaminski, the former Manchester City captain would have wanted his side to continue piling on the pressure and proving their quality in the second-half.

Jon Dahl Tomasson would have wanted more from his team after an acceptable first-half. The Dane would have wanted his players to play with more intensity on the break and try and pierce through Burnley’s susceptible defence, which has proven to be shaky in recent weeks.

Burnley got the game back underway in the second-half, as they looked to try and make their home advantage count and try and keep their fine recent record in derby days going.

Rovers won the ball back after 47 minutes as Jake Garrett picked out Brereton Díaz with a fine switch to the left. The Chilean kept his composure to bring the ball down, cut inside from the left and fire at Muric, but the former Manchester City youth goalie managed to hold the attempt.

Despite protestations from Sam Gallagher, who had been studded in the knee, leaving him with a huge cut, he was withdraws in the 52nd minute and replaced by Jack Vale.

A few minutes after Anass Zaroury was shoved into the advertising boards by Dom Hyam, the tricky winger got up, dusted himself down and claimed an assist as Burnley broke the deadlock in the derby. The Belgian winger picked the ball up, gained half a yard on Ryan Hedges and put in an inviting cross into the box that narrowly evaded the head of Daniel Ayala, but saw Ashley Barnes connect emphatically as he glanced the header into the bottom right-hand corner of the net for 1-0, before wheeling away in celebration, just after shoving Thomas Kaminski into the back of his own net.

The 62nd minute saw another feisty challenge which led to Jack Cork being booked for a tackle in the centre of the park.

The on-loan Southampton winger had an instant impact after just two minutes. The Rovers goalkeeper made an uncharacteristic passing error, as he gave possession back to the hosts with a pass to nobody, but made a save down at his near-post to deny the hosts a second.

The Belgian’s heroics stopped there, sadly, as Burnley did manage to grab a second and double their lead in the 74th minute, as Anass Zaroury got the goal his second-half had deserved, after Rovers handed the ball back to the hosts on a plate. Burnley continue piling on the pressure; a goal-kick by Daniel Ayala, short to Clinton Mola saw the on-loan VfB Stuttgart defender struggle clear his lines as Burnley’s press saw him dispossessed. Jack Cork kept the hosts’ pressure on by nodding the ball to Nathan Tella, who provided a delightful first-time flick assist into the path of Ashley Barnes, whose first-time volley was parried by Kaminski, only as far as Zaroury who coolly found the bottom corner of the net to double the hosts’ advantage for 2-0.

The visitors were well and truly beaten by the 81st minute, as Ashley Barnes sealed the victory and his name in Burnley folklore, by trebling the scoreline to 3-0. Burnley were passing rings around Rovers, as Jack Cork’s chip into Nathan Tella, saw the substitute pass via his back into the path of Josh Brownhill who cut the ball back from the byline to Barnes, who took a touch to steady himself and ease the ball past the sliding Ryan Hedges, before the shot deflected off the outstretched boot of Dom Hyam and wrongfooting Kaminski, before rolling over the line for 3-0.

In the 83rd minute, Burnley made their second switch, introducing Charlie Taylor for Ian Maatsen.

After Daniel Ayala was booked in the 86th minute, Burnley soon made their third and fourth changes in minutes 87 and 88 as Halil Dervişoğlu and Jóhann Berg Guðmundsson came on to replace Anass Zaroury and the goalscoring hero, Ashley Barnes.

Three minutes of added time was called for by David Coote, but it proved an irrelevant extension to a game which was already done, as the final whistle was soon met by a deafening roar from the Turf Moor terraces.

A poor display summed up by a poor performance. There’s not a lot one can say about a disappointing day. For all the build-up, many were let down by the team selection before the game kicked-off. In hindsight, there were many suggestions that the selection was incorrect, which cannot be argued against once you see the overall scoreline. Whilst the idea and concept that Jon Dahl Tomasson wanted to implement can be seen, it was always going to be difficult to go away from home and try and play the best passing team in the division, at their own game and Rovers are now forced to spend the next four weeks licking their wounds. The four-week break gives Rovers and Tomasson a chance to, not only rest, but to work on their game given – as the manager put it – ‘we don’t have time on the training pitch given our busy fixture schedule.’

Despite the defeat meaning Burnley will spend Christmas atop of the tree, Rovers will sit in 3rd place from 21 games, with 36 points and a positive goal-difference of +2.

With club football now halted due to the World Cup, Rovers won’t be back in action until Saturday 10th December, where they partake in another Lancashire Derby, when Preston North End come to Ewood Park for the midday game. After that, a trip to Norwich City is on the cards, as the Sky Sports fixture is on Saturday 17th December at Carrow Road at 5:30pm, before the Carabao Cup Fourth Round rolls into town, as Rovers host Nottingham Forest on Tuesday 20th December at 7:45pm.