Sign in
Home First Team News “Today shows that, if you’re brave enough and you want to play our way of football, then you can succeed and achieve great things, and the boys did that.” 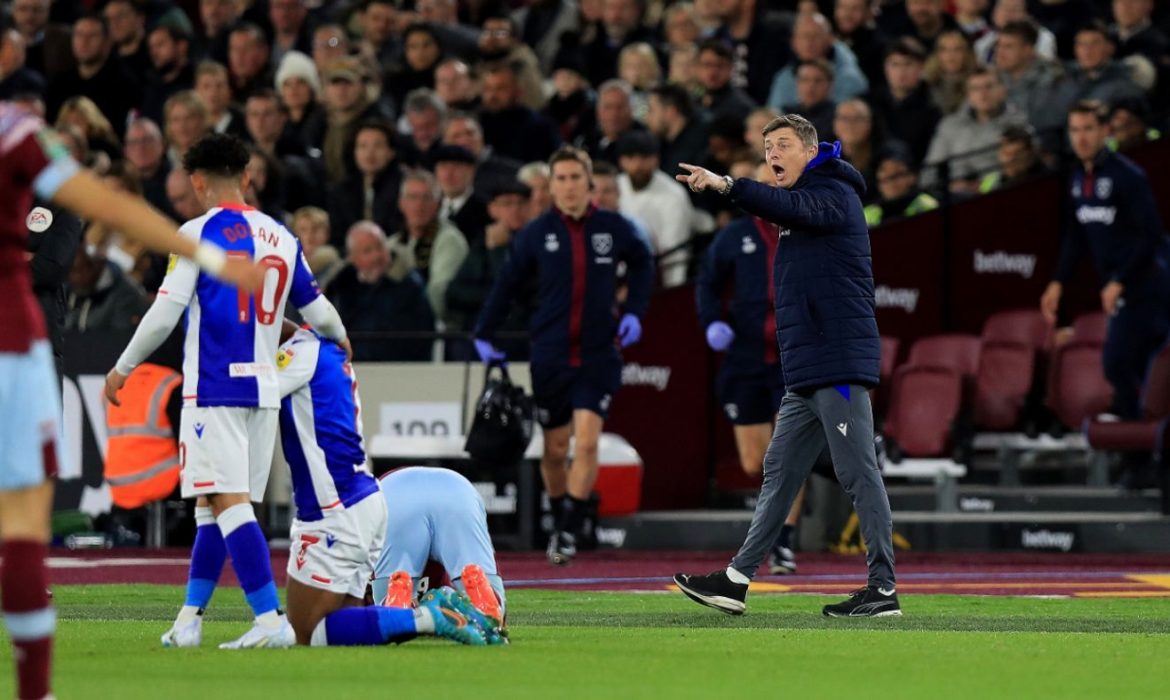 Jon Dahl Tomasson was beaming with delight after watching his young Rovers side come away from the London Stadium, into the last 16 of the Carabao Cup, following a pulsating 2-2 draw with West Ham United, in which Rovers came out on top, 10-9, on penalties. The Head Coach heaped praise on his side who kept their composure at the crucial moment and the travelling support for their commitment and effort midweek.

“I’m extremely proud of the boys. They deserve great credit after coming to this great stadium and put in such a good performance. I made a lot of changes and a lot of those who played today have been very patient and they showed that I can use them in the league. The way we played and the gameplan was focussed on being very brave on the ball and I think we did that against a team who finished 7th in the Premier League last season, spent around £150m this summer and won all of their games in the Europa Conference League, this season. I have to give big credit to the players and when you see our fans travel on a day like today, you have to also give them credit. They saw a good game, they saw a team who wanted to be brave on the ball, who wanted to play and work hard for the team. It was a tremendous performance.

“It was great to see Jack (Vale) scoring his first senior goal for Rovers and Ben (Brereton Díaz) scoring, what is probably, the best goal of the season, given the time and the manner in which it was scored. To come here and create chances at this great stadium showed how well the boys did.

“It looks very easy to take a penalty, but it’s not that easy. I’ve taken and missed a few throughout my career! It’s not only the pressure, but those young players are learning a lot today. They learn about intensity, about how quick they need to think, and of course, coping with the pressure of the penalties, but their kicks were very good. It’s always good to see your penalty training come off, because sometimes, when you train for penalties, you don’t always win them.

“When it’s a shootout, you never know how it’ll go. We’ve done the most preparation possible. We had the list ready, we had trained penalties so far, throughout the season, but at the end of the day, you’re playing against very good players, you’re playing away from home, they had a lot of players who have been capped by their national teams, but we have to give enormous credit to the players, especially those who have had to be very patient. Everyone put on a great performance today at a very high level.

“Today shows that, if you’re brave enough and you want to play our way of football, then you can succeed and achieve great things, and the boys did that. Of course, you have to be brave. Football is about being brave. If you’re not brave, you’ll never be good enough and you’ll never be successful.

“I was really happy for Jack because he’s been waiting for that goal. I’ve watched him play extremely well with the under-21s, in pre-season and he’s put in some good displays off the bench, but has struggled when starting games. To have a performance like tonight, when starting, is very good for Jack. Hopefully he can take this confidence and improve. That’s what football is about. You want to get better and improve every day as a footballer and I think all the lads should be extremely proud. A lot of players travelled down with the team, who came off the bench to have a big impact on the game.

“It was brilliant to see all our fans, over 2000 of them. Supporters travelling in those numbers for midweek games and all that distance. It’s amazing. I’m really enjoying seeing them supporting our boys and I’m really happy that we can give something back to them.

“We still have another game before the break for the World Cup! I haven’t forgotten about that! We’ve been in a busy, intense period and hopefully we can come away from tonight with no injuries. The players who stayed at home and trained at the training centre had a good intense session, and the spirit was high there, this morning, and the spirit is even better in our dressing room after this great result.”