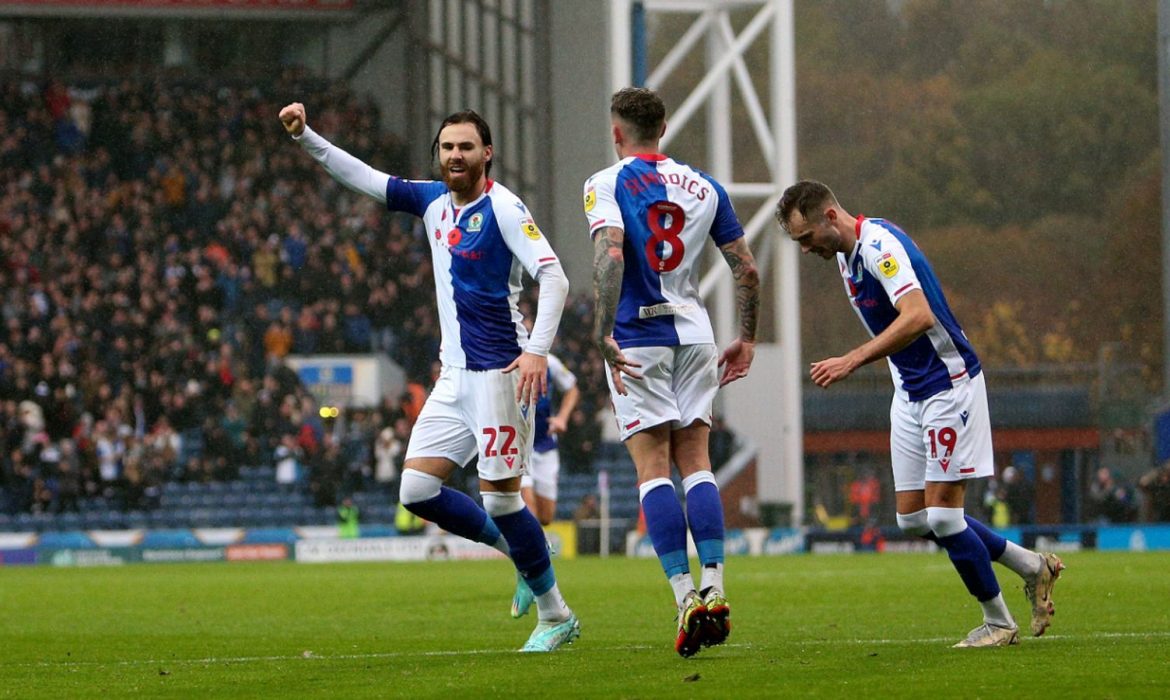 Rovers celebrated their 147th birthday in style, by picking up their sixth consecutive home victory – which hadn’t happened since 1994/95 – as they stood firm to deny a valiant, but misfiring Huddersfield Town, who remain rooted to the bottom of the league.

Following Tuesday night’s disappointing 1-0 away loss against Coventry City, Jon Dahl Tomasson made three alterations to the side that tasted defeat in midweek. Harry Pickering, Ryan Hedges and Sam Gallagher all came back into the side, as Wharton brothers, Scott and Adam and Jack Vale all dropped out of the starting side, with Adam out of the squad altogether, whilst Scott and Vale were on the bench. There was also a return to a four-back system, as Ryan Hedges notched his 150th career start, whilst Harry Pickering earned half a century of Rovers starts.

As the rain drizzled down over a vociferous Ewood Park, there was a pre-match Remembrance tribute with the game being the closest home league fixture to Remembrance Day on the 11th November. Following an impeccably observed tribute, where the Last Post was played, Huddersfield Town got the ball rolling after James Linington’s whistle, as they looked to try and get themselves off the bottom of the table.

Rovers started the game brightly as after two minutes, Sam Gallagher combined with Sammie Szmodics, as the former backheeled the ball into the latter, but the scorer at Hull City failed to replicate his heroics as his effort veered narrowly wide.

A very quiet first-half almost flew by until Ben Brereton Díaz ignited the game in the 35th minute, by putting Rovers ahead. Rovers picked up a loose ball inside their own half and Harry Pickering played through a sumptuous over the top ball into the path of the Chilean forward, who took the ball down into his stride. Despite some challenges from the Town backline, the attacker kept his composure to cut back onto his right-foot, after entering the area, and blasting the ball into the near-post, leaving Lee Nicholls stranded, for 1-0.

The 37th minute saw Jack Rudoni booked for fouling Dom Hyam, before his teammate, Etienne Camara was also shown yellow, three minutes later, for catching Lewis Travis with a flailing arm, which forced the Rovers skipper into a prolonged period of treatment, as blood was pouring from his nose.

As three minutes of time were called for by Mr. Linington, Rovers came forwards again in the second minute of added time, as Sam Gallagher was played in, via a very similar over-the-top through ball that Brereton Díaz had received. The English attacker couldn’t replicate his strike partner’s composure, as William Boyle made a great recovery tackle, as Huddersfield were forced to concede a corner.

The set-piece by Ryan Hedges was cleared only as far as Lewis Travis, who couldn’t replicate his opening day strike against Queens Park Rangers, as it flew off target.

That proved to be the half’s last action, as the first 45 minutes were brought to a close, as Rovers had made the best of a subdued, but decent performance.

Jon Dahl Tomasson would have been pleased with the fact his side had found themselves ahead, but he would have been urging his side to twist the knife in the second-half, given how perilous the one-goal margins are.

Mark Fotheringham would have been annoyed that, despite his side crafting half-chances, they hadn’t really managed to make Thomas Kaminski work in the Rovers goal. He would have wanted his side to play with more urgency and directness in the hope they could get themselves out of the bottom three.

Once the sides returned to the field, it was Rovers who got the game back underway, as they looked to earn three points that would see them close the gap on league leaders, and rivals Burnley – who lost 5-2 to Sheffield United in the early kick-off – to just two points ahead of the crunch derby game on Remembrance Sunday.

The first chance of the second-half came Rovers’ way in the 48th minute as Callum Brittain show his shot blocked behind for a corner.

Rovers continued piling the pressure, as Tyler Morton’s low corner was flicked towards goal by Dom Hyam, but the effort was again blocked.

Jack Rudoni tried his luck in the 53rd minute, but the effort proved easy for Thomas Kaminski to claim.

Rovers nearly thought they’d doubled their lead in the 58th minute as Sammie Szmodics ended a hectic move, but the goal was ruled out for offside. Gallagher fed Brereton Díaz who saw his effort smartly stopped by Nicholls, before the rebound fell to Tyler Morton who forced another good save from the goalkeeper, whose parry only fell as far as Szmodic who nodded the ball into the back of the net, before the flag was raised.

Huddersfield began to pile on the pressure after the hour as they pumped a long ball into the box that fell to Danny Ward, who nodded wide of the mark.

Rovers made their first change of the game in the 67th minute as Scott Wharton replaced Sam Gallagher, with Rovers moving to a back-three.

David Kasumu was soon booked a minute later, after bringing down Lewis Travis.

Huddersfield made their own change in the 72nd minute as Brahima Diarra replaced Etienne Camara and the substitute didn’t take long to test Thomas Kaminski, as in the 74th minute, he forced the Belgian into a save, with an effort from outside of the box.

Although the Terriers huffed and puffed in vain, they had Lee Nicholls to thank for keeping them into the game as added time approached, as he pulled off a fine near-post save to deny Ben Brereton Díaz in the 90th minute, after Jack Vale found the Chilean.

Although three minutes of time was added onto the end of the tie, neither side could make the final push as Rovers held onto claim three priceless points ahead of their next league game, on Remembrance Sunday.

A fantastic result that wasn’t really backed up by the performance, but only the three points matter, right? Rovers showed that they were capable of seeing out games in fine fashion, clinching their eighth league clean sheet of the season and their twelfth victory of the campaign. Although Huddersfield did show that they were capable of whipping up a scare, Rovers stood resiliently and kept their clean-sheet and the three points in Lancashire.

After events at lunchtime, Rovers now find themselves in a healthier, but tighter position than was the case this morning. Rovers – after 20 games – are sat in 2nd place with 36 points and a positive goal-difference of +5. With the final league game before the World Cup on the horizon, it will certainly be a firecracker of a fixture ahead of the festivities.

Speaking of fixtures, Rovers now get to turn their attention to the EFL Cup in midweek, as they travel down to the Olympic Stadium to face David Moyes’ West Ham United on Wednesday 9th November at 7:45pm for the Third Round tie. Following that, the most anticipated East Lancashire Derby in years appears on the calendar, as 2nd placed Rovers travel to league leaders, Burnley on Remembrance Sunday – 13th November – for the 12:30pm kick-off, which will be controlled by Sky Sports, in the last league fixture before the World Cup starts.