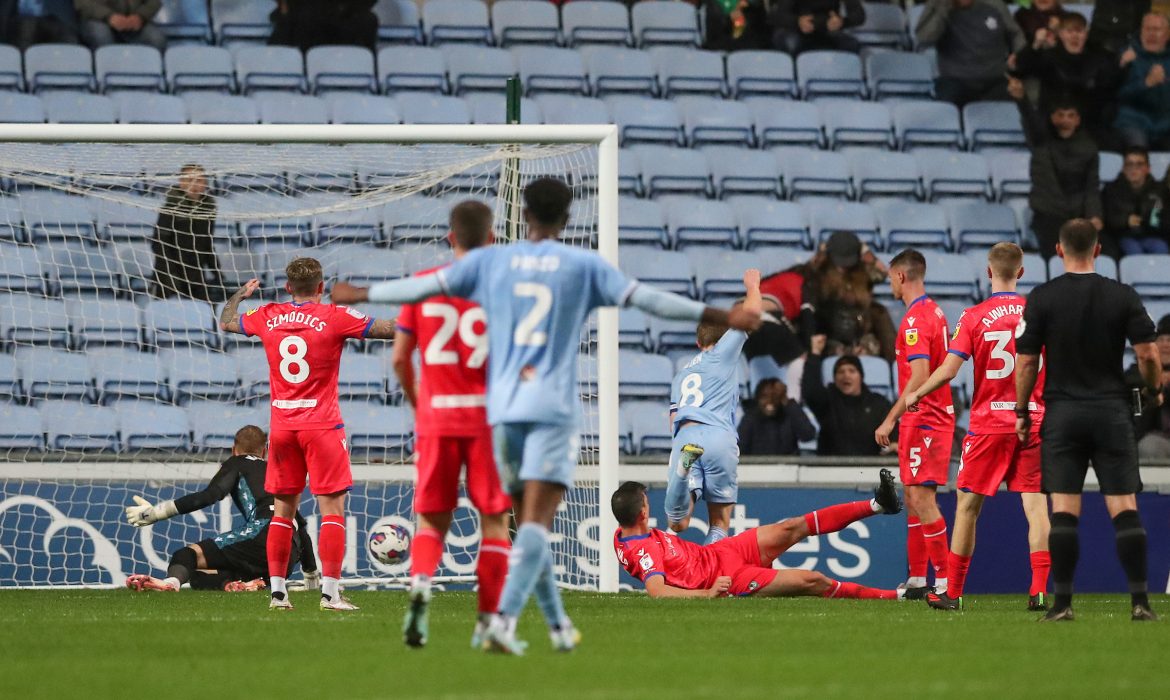 ‘Lacklustre’ was the adjective of the night as Rovers saw their winning run fade following a dismal performance away at troubled Coventry City, at the Coventry Building Society Arena, where red mist descended.

Following a fourth straight victory on Saturday, which saw Rovers beat Hull City, 1-0, at the MKM Stadium, courtesy of a Sammie Szmodics finish, Jon Dahl Tomasson’s men come into this tie in the Midlands looking to notch five consecutive victories for the first-time this campaign. With four games in just under a fortnight prior to the World Cup break on the horizon, the Rovers Head Coach made three changes for tonight’s midweek clash. Callum Brittain, Daniel Ayala and Jack Vale all came into the side, as Harry Pickering, Tyhrys Dolan and Sam Gallagher all dropped out. Whilst the former pair were available from the bench, Gallagher was ruled out of the game with an injury. Lewis Travis continued to skipper the side on what was to be his 150th start in Rovers colours.

As both sides geared up for kick-off after what has been a tumultuous few days for hosts, Coventry City and the Rovers away support, with neither knowing the venue of the game until Monday evening – following the administration of Coventry Wasps – it was the away side who started proceedings after Tim Robinson blew his whistle, with Jon Dahl Tomasson’s side looking to notch a quintuple.

After two minutes, Rovers nearly handed Coventry an effort on a plate as Thomas Kaminski failed to clear, before the ball fell loose on the right-wing, but Adam Wharton was on-hand to clear up his goalie’s mess before a Sky Blue shirt could capitalise.

The first attempt of the game came after three minutes as Viktor Gyökeres saw his shot blocked by Daniel Ayala before Josh Eccles tried his luck from just inside the box, but Rovers’ Belgian did well to deny the midfielder.

The host’s bright start continued into the sixth minute, as Gustavo Hamer drilled one in from range that stung the palms of Kaminski.

Rovers got the ball up the other end quickly as Ben Brereton Díaz slipped Jack Vale through with a brilliant reverse pass, but Ben Wilson in goal, did well to sweep up the pass before the Welshman could cause havoc.

Although Rovers had started the slower side inside the opening eight minutes, a Blues counter saw Jack Vale pass the ball into space, as Ben Brereton Díaz ran onto the pass. The Chilean did well to cut in from the wing and blitz past his man off the left, before attempting to curl an attempt into the far-post – almost Sunderland at Ewood Park-esque – but his accuracy didn’t match his home effort, as Coventry were awarded a goal-kick.

The 13th minute saw Thomas Kaminski forced into another save when Hamer’s 35-yard free-kick dipped straight into the eyeline of the Rovers ‘keeper, but the Belgian was alert enough to parry the ball away.

Viktor Gyökeres was at it again in the 22nd minute, as he looked to find the bottom right-hand corner of the goal, but was once again thwarted by Rovers’ in-form goalkeeper.

From a Coventry corner in the 27th minute, a goalmouth scramble ensued which nearly saw City’s clinical Swede net his sixth of the season. After a slice by Daniel Ayala, the ball seemed to ricochet off of Gyökeres, who seemingly denied himself a goal, as Rovers soon cleared the danger.

Jack Vale saw a 32nd minute attempt blocked by Jonathan Panzo, following a cross by Sammie Szmodics that was cleared as far as Vale at the back-post.

Moments later, Coventry got the ball back up the field and broke Rovers’ defensive line as Callum O’Hare was slipped in-behind, but Dominic Hyam made a fantastic recovery run and tackle to deny his former teammate the opener.

Adam Wharton was soon up to his old tricks with another inch-perfect through ball into Callum Brittain’s path, who was racing into the area, but the defender could only curl his effort into the side-netting, to the away fans’ dismay behind the goal.

Ben Brereton Díaz again came in off the left to try and test Wilson, but his attempt lacked any power, as the goalkeeper picked up the trickling effort.

Dominic Hyam was booked in the 39th minute for fouling Jamie Allen in the middle of the park.

The home side’s fine first-half continued as they managed to edge their noses in-front in the 41st minute, following a fine flowing move. The ball was worked out to Josh Eccles, who was making an overlapping run down the right, before his low cross across the face of goal was met by Jamie Allen who needed no second invitation to sweep the ball home, into the bottom right-hand corner, for 1-0.

After nothing came of the two minutes of added time that were allocated onto the end of the first-half, Tim Robinson brought it to an end, with the home fans delighted with how their side had fared.

Mark Robins’ smile would have been to his ears at the break as his side headed into the lead, after a perfect first-half display. His young team came out of the blocks rapidly in the first-half and quelled most chances that Rovers had on the counter-attack, whilst showing their clinical nature in-front of goal, forcing Thomas Kaminski into five saves at the break. The former Manchester United player would have willed his side on, to fight in the face of adversity and continue their fine start to the game.

Jon Dahl Tomasson’s reaction would have been different to the one he had on Saturday. The Dane would have been annoyed with how his side had been so sloppy in possession and lacked any real pace, tempo and intensity in their play going forwards. The one shot on target to the host’s six would have equally annoyed the former attacker, with his side failing to be as creative as they were at the weekend.

Before the second-half began, Rovers made their first change of the game as George Hirst came on to replace Jack Vale.

Once both sides had returned to the pitch, it was Coventry who got the ball rolling, as they looked to keep their lead and clean-sheet to earn the victory that would edge them out of the relegation zone.

Josh Eccles – who earned an assist in the first-half – was booked in the 55th minute after pinning down Ben Brereton Díaz, who stood over the resulting free-kick, which was well saved by Ben Wilson, who parried the ball away from the incoming Scott Wharton.

Ten minutes later, Coventry broke from a Rovers counter-attack, as Gyökeres ran before sliding in the goalscorer, Allen for a second, but Thomas Kaminski kept his side in the game with a fine save.

Mark Robins made his first change in the 71st minute, as former Rovers loanee, Kasey Palmer was introduced for Gustavo Hamer, who departed.

A long ball by Daniel Ayala in the 74th minute nearly saw Ben Brereton Díaz through, but he was challenged by the onrushing goalkeeper, Ben Wilson, who not only did well to pluck the ball from mid-air away from the attacker, but saw luck go in his favour as the ball spun back into his path before he cleared the danger.

Dolan’s impact was instant as a minute later, he put in a cross for George Hirst which the on-loan Leicester City man failed to get on target.

The 83rd minute saw another header go over, this time Bradley Dack’s nod flew over the bar after Brereton Díaz’s delivery.

Rovers’ miserable night was compounded in the 85th minute when Jake Garrett saw red after a clattering challenge, just inside the Coventry half, which saw his appearance go no further than five minutes, as he picked up a three-game suspension and left Rovers in the lurch.

The 88th minute saw Rovers’ final change as Harry Pickering replaced Scott Wharton, before Tim Robinson added on four minutes to the end of the tie.

In the third minute of added time, Kasey Palmer, Daniel Ayala and Thomas Kaminski were all booked after Coventry were awarded a free-kick on the edge of the Rovers area that Viktor Gyökeres put high and wide.

After Thomas Kaminski’s goal-kick, the full-time whistle was called for, as another dismal midweek performance put a downer on what had been a very positive week for Jon Dahl Tomasson’s Rovers.

It was a game that never felt like it would go well, from inside the first five minutes. Coventry City started the brighter of the two sides and Rovers failed to get out of gear, in a complete contrast to Saturday, where Rovers should have been ahead by multiple goals against Hull City. The Sky Blues showed their resilience and quality, despite their tough off-field situations, as the likes of Callum O’Hare, Viktor Gyökeres and goalscorer, Jamie Allen proved their worth on the counter-attack, as Rovers lacked any real urgency in going forwards, even towards the final moments of the game.

Despite the defeat, Rovers do remain in 2nd place, but have now played a game more than everyone else in the top six – two more than Queens Park Rangers, who play Norwich City on Wednesday – with 19 fixtures. Tomasson’s men are on 33 points, but have seen their goal-difference drop to a positive +4.

There’s not long for Rovers to try and get back to winning ways despite that midweek disappointment, as on Saturday 5th November, Rovers hope to celebrate the club’s 147th Anniversary in style, and serve up a firecracker of a game on Bonfire Night, as Huddersfield Town make the trip to Ewood Park for the 3pm game. Following that tie, the EFL Cup rolls back around, as Tomasson and his players make the long trip down to East London, to face West Ham United at the Olympic Stadium on Wednesday 9th November at 7:45pm, in the Third Round of the tournament. That leaves Rovers with one final game before the break for the World Cup, and it’s the biggest of all as the Blues clash with their Claret neighbours, as Vincent Kompany’s Burnley play host to the 104th East Lancashire Derby, on Remembrance Sunday – 13th November – in a Sky Sports-controlled 12:30pm fixture.