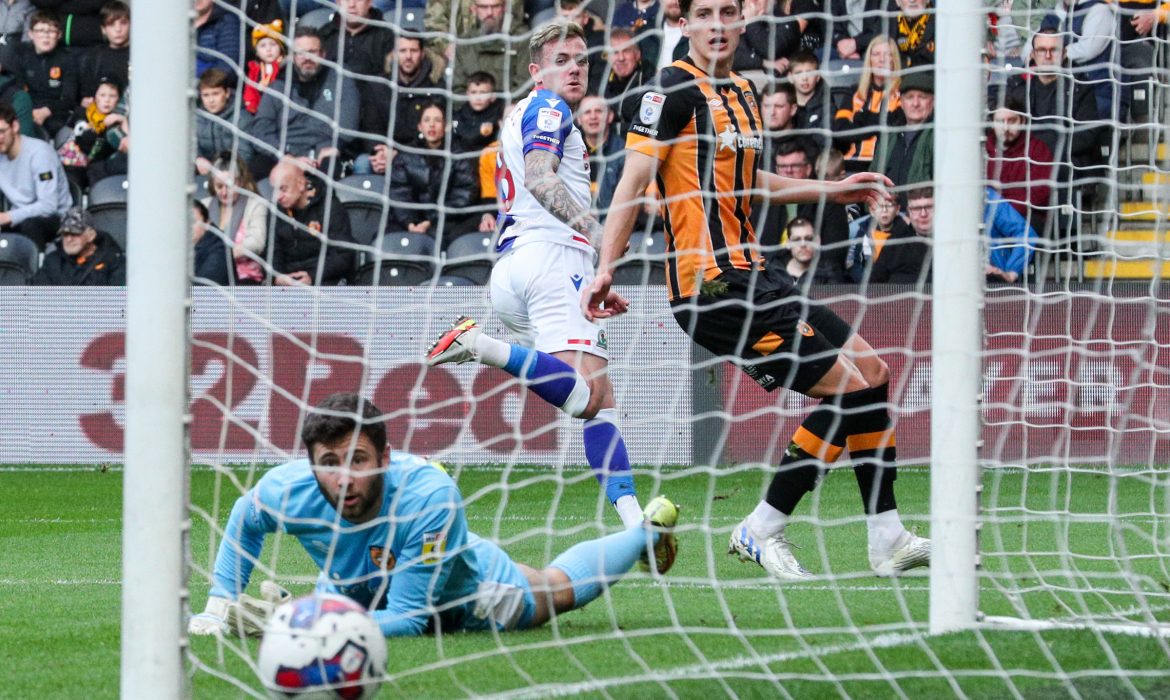 Jon Dahl Tomasson’s Blues continued their fine form and rise up the Championship table as they notched a fourth straight league victory by edging past an in-form Hull City side, courtesy of a 15th minute Sammie Szmodics finish which condemned the Tigers to a fifth defeat in six home games.

After notching up a fine, but hard-fought 2-1 home victory against Birmingham City at Ewood Park last Saturday, Rovers came into this affair following a week of rest and training, but were forced to make two changes due to injury. Although former Tiger, Daniel Ayala returned to the bench after a period of injury, he was joined by Hayden Carter who saw Tyrhys Dolan come in to replace him, whilst Ryan Hedges was replaced by Sammie Szmodics, with the Welshman out injured. With Hedges and Callum Brittain both absent with injury, Jon Dahl Tomasson decided to switch to a 4-3-3 system, with Lewis Travis at right-back.

Among the alterations, there were some milestones to tick off within the Rovers camp as Scott Wharton amassed 50 league appearances in the Blue and White of his boyhood club, whilst his defensive partner for the day and summer signing, Dom Hyam racked up 200 career league appearances.

With around 1500 Rovers fans in the corner of the MKM Stadium – including yours truly – Tyler Morton got the ball rolling for the Blues as they looked to try and clinch four successive victories for the first time this season.

Hull started rather nervously inside the opening five minutes as Rovers were crafted an opportunity courtesy of Tyrhys Dolan’s pressing which saw him set up Adam Wharton, but the young midfielder’s effort flew high over the crossbar.

Ben Brereton Díaz came into life after six minutes as he slid Sammie Szmodics through, but the former Peterborough United man’s effort was passed past the post.

The pair combined again in the 13th minute, but this time Szmodics’ effort tested Nathan Baxter, which the Hull shot-stopper stood up to deny, before his defence cleared the danger.

The 15th minute was third time lucky for Sam Szmodics, as he managed to get back at Baxter for saving his previous effort, but the attacker’s run and finish proved of the highest quality, as was the pass that assisted him. Adam Wharton picked the ball up around 25 yards away from goal and found Szmodics via the most delicate of poked through balls, as the ball split two Hull defenders, before falling for Szmodics who let the ball run across his body prior to stroking the ball home just inside the far-post for 1-0, as the visiting contingency exploded in delight.

Hull restarted the game and continued to push forwards without really threatening Rovers, as the next 14 minutes of the game fizzled out into a battle for possession. The home side’s growing frustration was encapsulated in the 29th minute, when former Shrewsbury Town midfielder, Ryan Woods was booked after fouling Szmodics.

The first-half almost petered out before Ben Brereton Díaz could test Nathan Baxter for the first time in the 45th minute, however the Chilean’s attempt didn’t trouble the goalie, who saw the effort trickle into his gloves.

Although referee David Webb added on three minutes of time to the end of the first period, Rovers nearly closed it out with a second goal in the final minute of the allocated time.

Caretaker manager, Andy Dawson, would have been frustrated with his side’s lack of attacking threat in the first-half. The interim Tigers boss would have been encouraging his side to try and make their home advantage count, in-front of their second highest home attendance of the campaign, thus far. The former City defender would have wanted his side to play with more urgency and desire, having seen his side been brushed aside for most of the first 45 minutes.

Just before Hull restarted the game in the second-half, Andy Dawson made two chances to his side, as Ozan Tufan came on to replace Jean Michaël Seri, whilst Brandon Fleming was introduced for Alfie Jones.

The first chance of the second-half fell the way of the hosts as Dimitrios Pelkas’ corner fell to City skipper, Jacob Greaves, but the central defender couldn’t make his chance pay as his nod fell wide of the far-post.

The 53rd minute saw Ben Brereton Díaz play a lovely reverse pass into the path of Sam Gallagher in the box, but the attacker’s effort was smartly saved by Nathan Baxter.

Rovers soon streamed forward a minute later as they won a corner. Tyler Morton’s delivery was met by Scott Wharton who saw his effort blocked, only as far as Szmodics, who failed to replicate his first-half accuracy, as Hull were soon awarded a goal-kick.

Rovers soon won another corner on the hour mark, as Szmodics tried to find Gallagher, but the effort across the face of goal was put behind, much to Rovers’ dismay as they failed to capitalise on the set-piece.

The 63rd minute saw Rovers make a double change as the defensive duo of Daniel Ayala and Hayden Carter were introduced, as Tyrhys Dolan and Adam Wharton made way.

Lancashire’s favourite Chilean was soon on the move again as he tried to notch his ninth of the campaign, but his rocket from range zipped past the post, despite Baxter’s nervy dive.

In the 67th and 71st minutes, respectively, both sides made changes. Hull City were first, as they introduced their top scorer, Óscar Estupiñán for Greg Docherty, whilst Rovers threw on Bradley Dack and Jack Vale for Sams, Gallagher and Szmodics.

Tobias Figueiredo was soon booked for bringing down Tyler Morton in the 78th minute, as Rovers tried to push for a second in order to put daylight between the two sides.

Hull soon made their fourth change of the evening as Ryan Longman was hooked, allowing Doğukan Sinik to make his way onto the field for the final 10 minutes.

As the Tigers began to push forwards, they began to test Rovers’ backline, without really earning themselves a position to test or threaten Thomas Kaminski. Despite the home crowd willing their side on, with very late rally cries, David Webb, the official, decided to make things even nervier for the away fans by adding on a minimum of six minutes, by the time the 90th minute rolled around.

Luckily for Rovers, they stood strong and resolute, managing to deny the hosts any attempt either at goal, or to test Thomas Kaminski and despite a late change by Hull to introduce Lewie Coyle for the booked Tobias Figueiredo, Rovers managed to see out the game and claim three comfortable points, as the away end behind Nathan Baxter’s goal exulted with delight.

It was delight for Rovers come 5pm, as they notched up four consecutive victories for the first time this campaign, as optimism rained down on the Blue and White halves and Jon Dahl Tomasson, following a gritty, but professional performance against a side who have shown prolificacy in recent weeks. Whilst the game was one, that probably won’t be remembered or highlighted with any significance in any future season reviews, it was a crucial win in many aspects, as Rovers not only kept their seventh clean-sheet of the campaign, but the three points went a long way to further spreading confidence across the side and the supporters.

Although Rovers did find themselves in pole position midway through the second-half, a 2-1 comeback victory over Reading, by their nearest rivals and neighbours, Burnley saw Vincent Kompany’s side end the weekend atop of the division, leaving Rovers in 2nd place. Rovers are currently on 33 points after amassing the most wins in the division with 11 – which is their highest tally after 18 league games since being crowned Champions of England in 1994-95.

Next up for Rovers is an away trip to an unknown destination, as Coventry City attempt to play host to Jon Dahl Tomasson’s outfit on Tuesday 1st November at 7:45pm. Due to the ongoing financial and administrations issues surrounding Rugby Union side, Coventry Wasps, Coventry City’s future at the Coventry Building Society Arena is at doubt, meaning Rovers might find themselves travelling to an alternative Midlands destination for their 19th game of the league campaign. Once that kerfuffle is sorted, Rovers will become the hosts, as Huddersfield Town make the trip to Ewood Park on Saturday 5th November for the 3pm kick-off, before the EFL Cup rolls back around, as Rovers make the long trip down to the capital, to face David Moyes’ West Ham United side in the Third Round at 7:45pm on Wednesday 9th November.