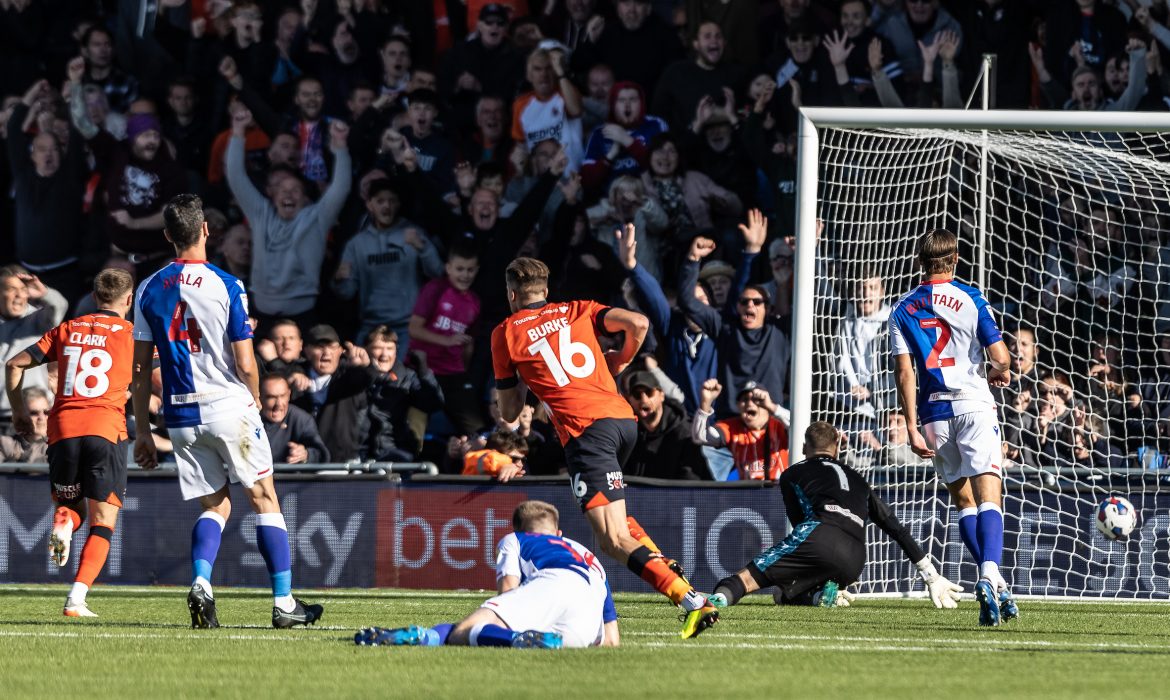 Rovers stumbled into the international break after suffering their fifth defeat of the campaign, against a Luton Town side who clinched their first home victory of the season at Jon Dahl Tomasson’s expense.

As Rovers headed into their final game before the first international break of the campaign, Jon Dahl Tomasson named an unchanged team for the first time in his tenure as the side that superbly dispatched Watford, 2-0, at Ewood Park on Tuesday, were allowed to continue their fine work against the Hornets’ bitter rivals.

With both sides out onto the Kenilworth Road turf, the away side got the ball rolling following referee, Josh Smith’s opening whistle. Rovers were looking to earn two consecutive wins that would put them in good stead ahead of the international break.

Ryan Hedges was the first player to get the shots away in this game, as his third minute effort from range deflected behind for a corner.

Rovers sustained their attack until the seventh minute when Harry Pickering cut the ball back for Ben Brereton Díaz who tried to squeeze the ball past Luton goalie, Ethan Horvath, but the Chilean saw his effort cleared off the line.

Following a quiet spell, Luton scurried forwards in the 19th minute as Henri Lansbury looked to slot the ball into the bottom left-hand corner, but Thomas Kaminski was alert enough to deny the former Arsenal midfielder.

The 39th minute nearly saw Rovers edge ahead, courtesy of a Thomas Kaminski assist. The big Belgian picked out Hedges with a long ball forward and the Welshman showed his skill and quality by taking the ball into his stride before cutting inside and trying a right-footed effort, but sadly, he failed to angle his attempt on target.

After one minute of time was added onto the end of the first period, Josh Smith soon called time on a very lacklustre first period, that despite saw Rovers on top for most of it, was very unconvincing from both sides.

Nathan Jones would have been pleased with how his side had resolutely defended Rovers’ early threat in the first period. The Welshman would have been encouraging his side to find that spirit and try and push in the second period to secure their first home win of the season.

Jon Dahl Tomasson would have equally been encouraging his side, but the Dane would’ve been warning his young team against the experience and threat that the home side carried, especially at home where their crowd was capable of making things difficult in their tight stadium.

As the players returned to the field, it was Luton Town who kicked the second-half off. Nathan Jones’ side were looking to secure their first home victory of the season, against opponents who haven’t won in Bedfordshire since an FA Cup Clash in January 2007.

Jordan Clark picked up a loose ball in the 52nd minute and tried to test Thomas Kaminski from just outside the Rovers penalty area, but he lacked the accuracy required to threaten the goalie.

The threat did some in the 58th minute, as Carlton Morris managed to get the Hatters ahead as he turned in Jordan Clark’s cross, as the former Norwich City attacker snuck away from the Rovers defenders and found some space before turning in his teammate’s cross past Thomas Kaminski, as Luton took a 1-0 lead.

Before the restart, Jon Dahl Tomasson shuffled his pack as he sent on Callum Brittain and George Hirst, as Hayden Carter and Tyrhys Dolan were replaced.

It took two minutes for Brittain to impact the game as he – and Tom Lockyer – were both booked for some handbags, following a few tough tackles.

The 63rd minute nearly saw Luton double their advantage as Morris nodded the ball down into the path of Cauley Woodrow who took a half-volley on, but his effort was blocked behind for a corner.

By minute 67, Luton did manage to grab a second and pile on Rovers’ misery as Reece Burke grabbed his first goal of the campaign. The former West Ham United defender picked up the ball around 25-yards out from goal before taking aim and piledrivering a left-footed effort past Thomas Kaminski to put the Hatter 2-0 ahead, as Rovers looked completely lost and devoid of ideas.

A minute later, Ryan Hedges again tried to find the back of Horvath’s net with a long-distance strike, but Rovers’ luck wasn’t there, as the former Aberdeen man’s effort again dropped wide.

Minute 73 saw John Buckley’s deep free-kick land onto the head of Daniel Ayala, but the Spaniard failed to divert his nod towards goal.

Luton Town soon moved their bench around as Cameron Jerome and Luke Freeman came on to replace Cauley Woodrow and Henri Lansbury.

As the home side continued to dominate against Rovers’ lacklustre display, with the Blues failing to even break out of their own-half at times, Luton made their third change in the 89th minute as Nathan Jones swapped the booked goalscorer, Carlton Morris for Fred Onyedinma.

After four minutes of added time were allocated, George Hirst and Ben Brereton Díaz combined, but the Chilean failed to angle the Leicester loanee’s knockdown on target.

The final change of the game saw Luton’s saw Jordan Clark replaced by Gabriel Osho for the closing moments of the game, as the final whistle soon followed.

There’s not much to discuss after such a lacklustre performance. Although Rovers started the brighter of the two sides during the opening quarter of an hour or so, Luton ultimately made their home advantage count, despite failing to do so in their previous five encounters at Kenilworth Road. Rovers looked rather devoid of ideas and lacking a real quality goal threat, despite creating enough chances. The upcoming two weeks off will hopefully give Rovers and Jon Dahl Tomasson time to work and build on their ‘okay, but not amazing’ start to the campaign, even though star forward, Ben Brereton Díaz will be away with Chile.

After the first 10 games of the campaign, Rovers promisingly find themselves in 7th position, with 15 points and a negative goal-difference of -2; a position they will undoubtedly take, but will look to improve upon following the intermission.

Once all the international fixtures end, Rovers will be back in action on Saturday 1st October, where they play host to Millwall at 3pm. Following that encounter, the Blues travel to Wales to face Cardiff City on Tuesday 4th October at 8pm in a game that will be televised on Sky Sports. Once the boys return from Cymru, they will again play in-front of their home crowd as Paul Warne’s lively Rotherham United make the trip across the Pennines on Saturday 8th October for the 3pm kick-off.