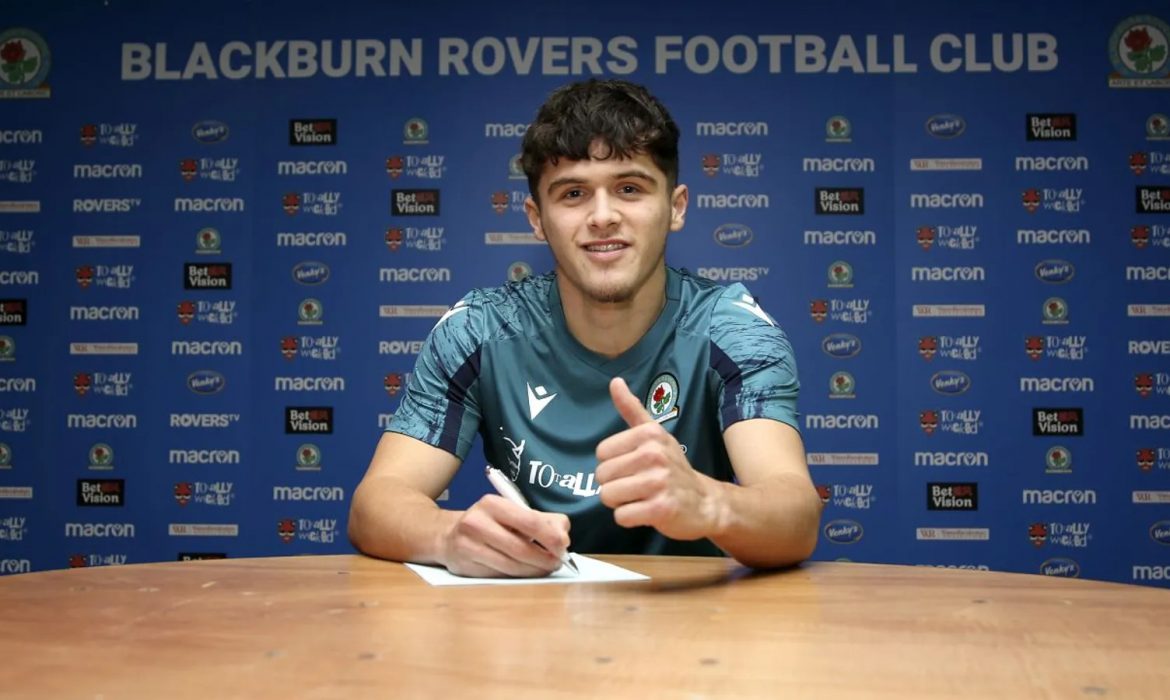 Blackburn Rovers have dipped their toes into Deadline Day by securing the addition of Wolverhampton Wanderers midfielder, Ryan Giles, on a season-long loan deal.

The 22-year-old, who is capable of playing in a wide variety of positions, including as a left-wing-back, has caught the eye of many second-tier sides over the past 18 months with fine displays, at both League One and Championship level and Rovers have moved quickly to ensure the Telford-born player would see out the 2021-22 season at Ewood Park.

Giles, who spent the first-half of this season on loan at Cardiff City and played in the Bluebirds’ 5-1 defeat at Ewood Park, is still in the early days of his career, but has proved to be quite an asset for his loan clubs throughout his varying stints across the Football League.

After graduating from the Wolves academy with glowing reviews, which included winning the side’s 2017-18 Academy Player of the Year, Giles was regularly offered sporadic stints to be part of Wolves’ domestic cup matchday squads, which included being part of the club’s 2018 first-team pre-season trip to Switzerland.

Despite being highly-rated by the Wolves hierarchy, after impressing in their under-18s side, notching six goals and four assists from 22 u-18 Premier League appearances, Giles was offered a four-year professional deal during the winter of 2018, but remained on the fringes of the first-team at Molineux and was therefore given a chance to express himself and gain first-team football at a regular level in the first loan move of his career, which came in March 2018, at his hometown side, National League North side, AFC Telford United. Despite being just 18-years of age, Giles immediately made an impact on the Bucks’ side, as he made his debut hours after putting pen-to-paper. His spell with the sixth-tier side would ultimately prove successful, both in terms of output and being a learning curve as he finished the season with two goals and seven assists, from the nine games he played.

His return from the sixth-tier saw his efforts rewarded with a birthday debut for the side in Gold, as he played 72 minutes in an FA Cup Fourth Round fixture, away at Shrewsbury Town, which ended 2-2 – with Wolves winning the replay at Molineux, 3-2, with Giles being an unused substitute. His eye-catching loan performances and cameo for the first-team saw him promoted from to Wolves’ under-23s squad, Giles saw out the remainder of 2018-19, in the Premier League 2, where he continued to show his quality at picking out his teammates, by providing four assists and notching a single goal in 19 games for the youth side.

2019-20 saw a bigger emphasis on Giles to accelerate his development and following his cameo against them in the FA Cup month prior, Shrewsbury Town were able to secure the highly-rated prospect on an initial season-long loan, that was soon cut short in January by Wolves, due them needing him as cover, following excessive injuries to midfielders. During his six-month return to Shropshire, he once again showed his adaptability at 19, by taking to League One like a duck to water, despite it being three tiers higher than AFC Telford United’s league. Giles endeared himself to the fans of his new side, just 68 minutes into his debut for Salop, as he netted the winner against Portsmouth, in a 1-0 home victory. The midfielder would go onto make 25 appearances for the Shrews, in all four EFL competitions, departing the New Meadow in January with one goal and three assists, but with incredible stock to his name.

After returning to Wolves in January 2020, and witnessing a 2-1 home defeat to Liverpool and a 3-2 win away at Southampton from the substitutes bench, Giles was soon off on another adventure back down in League One, this time to Mark Robins’ high-flying Coventry City, who at the time of Giles’ arrival on loan, were sat in 5th place. Due to Coventry’s good form, Giles had to wait a while in the wings before pulling on the Sky Blue shirt with the 20-year-old spending his first four games on the bench, before making his debut in a 1-1 home draw against Rotherham United. Rather unfortunately for Giles, that one-minute outing against Paul Warne’s side proved to be the only action he received during the second-half of 2019-20, as despite spending the next two games as an unused substitute, the campaign was soon curtailed due to the COVID-19 pandemic, with Coventry City being promoted back to the second-tier, as champions, on ‘points per-game’.

Despite their promotion, Coventry were able to agree on a deal for Giles to stay in the West Midlands until the end of the following, 2020-21 campaign, as Mark Robins’ men made their way back to the Ricoh Arena for their first second tier campaign in nine years. Despite still being 20, Giles’ evident quality, following his rapid rise up the leagues was showing as he stood out during the first-half of the 2020-21 campaign, as Coventry defied a pre-emptive pre-season tag of ‘strugglers’, as the Sky Blues sat six points clear of the drop zone, in 18th, by the time Giles was recalled back to Wolves, departing the Ricoh Arena with one assist after playing in all but four of the 23 possible games for Coventry City.

Rotherham United were Giles’ next destination, as he made the move from the Midlands to Yorkshire, only a day after being withdrawn from Coventry City. Although still in the Championship, Giles was given a differing taste in atmosphere to the buoyant one he would have had at Coventry towards the end of the 2019-20 season, when they were promoted, and even during the first-half of 2020-21, where they were defying the expectations of most. Giles played in all but one league game for Paul Warne’s side, during the second-half of the campaign – including all 90 minutes in a 1-1 home draw vs Rovers – but despite scoring twice in his first three games, including on his debut, in a 3-0 win over Middlesbrough, he was unable to steer the Millers away from a return to the third tier, as the Yorkshire side dropped into League One during the final few minutes of the season, despite being inches away from survival.

For 2021-22, Wolves decided that Giles’ development, would be helped by spending another year in the second-tier fighting for promotion to the Premier League, and thus, the now-22-year-old agreed on a move to south Wales, where he’d link up with former Wolves manager Mick McCarthy at Cardiff City for the campaign. Despite a bright start for the Bluebirds, as they picked up eight points from a possible 12 in their first four games – which saw Giles pick up four assists, including two in a 27-minute cameo at home to Millwall in a 3-1 win – Mick McCarthy’s fell into an abysmal run of form which saw the Irishman lose his job, after his side only picked up one victory in 10, scoring only four goals and conceding 22 in the process. During that poor run, Giles provided some positivity, as he notched an assist for Cardiff’s only goal in the 5-1 defeat at Ewood Park, against Rovers. Following McCarthy’s departure and the promotion of Steve Morison into the hotseat, Giles again showed his class in the first game of the post-McCarthy era, as he provided another two assists as Cardiff and Stoke played out a 3-3 humdinger. Prior to once again, being recalled by Wolves at the start of January due to him being required at Molineux for cover, following COVID cases and injuries, the Englishman registered another two assists for the Bluebirds – which both came in wins – as he left south Wales with nine assists from the 21 Championship games, he participated in.

Thus far, the second-half of the season has seen Giles used as a squad player for Wolves, with him being on the bench for three of Wolves’ four January fixtures, missing out on Bruno Lage’s side’s 1-0 win over Old Trafford. Despite his inclusion in the matchday squads, however, he has been unable to get himself on the pitch, which has led to his move to Rovers, after Wolves had made some moves in the transfer market earlier on in January, themselves. As a result of the Premier League side acquiring more depth, Bruno Lage decided to give Rovers and Giles the green light to link up, with Rovers themselves requiring some more depth, particularly in the wing-back position – where Giles played for most of his spell at Cardiff City – following recent injuries to Harry Pickering and Tayo Edun.

Giles arrives at Ewood Park with more than just experience in club football, the Wolves wide-man has also represented England Under-19s on four occasions, during their run in the Under-20s Elite League, during the autumn of 2019, which was also cut short due to the pandemic. Giles – who was part of a squad that included current Rovers loanee, Ian Poveda and the likes of Tottenham Hotspur defender, Japhet Tanganga and Chelsea midfielder, Conor Gallagher – came off the bench in three of England’s five games, as the young Lions beat Switzerland, before drawing with Netherlands – the game Giles started in – and Italy and losing to Czech Republic.

Although he is predominantly a winger who can operate on both sides, Giles is also capable of playing as a left-wing-back – a position which he’s excelled at over the past 18 months – and has proven his worth to each of his loan clubs through the quality that he has been able to provide from out wide. His assist numbers, particularly from the start of this season are incredibly encouraging, following the aforementioned nine he notched for Cardiff City.

Despite playing for a struggling Cardiff City side, who lacked a proper goal-threat after the first four games of the campaign, Giles’ stats are incredibly impressive, per WhoScored. From Championship players who have played at least 20 league games, this season, Giles sits atop of WhoScored.com’s table for ‘accurate crosses’, with 62 from his 21 appearances, with the runner-up being Huddersfield Town’s winger, Sorba Thomas. His ‘key passes’ statistic is also something to marvel at, with the Wolves loanee having the 7th highest key passes, with 52. As mentioned previously, Giles racked up 9 assists at Cardiff, but despite not playing in their last 3 league games, he’s still joint third in the league for assists, just behind Reading’s John Swift and Fulham’s Harry Wilson, and tied with Chris Willock of QPR. The Wolves man’s creative instinct is further highlighted by FBRef, who rank Giles second in the ‘assists per 90 minutes’ category, with 0.46, behind Bristol City forward, Antoine Semenyo’s 0.49 – yet the Robins’ attacker has only played 15 games this season, compared to Giles’ 21 appearances.

At just 22, Giles arrives at Ewood Park with an ambitious mentality which is sure to fit right in with our young and hungry side, as well as add quality to the varying areas of the pitch he is deployed in, as Tony Mowbray’s men look to take on the final hurdles, as we move into the final straight of the campaign.