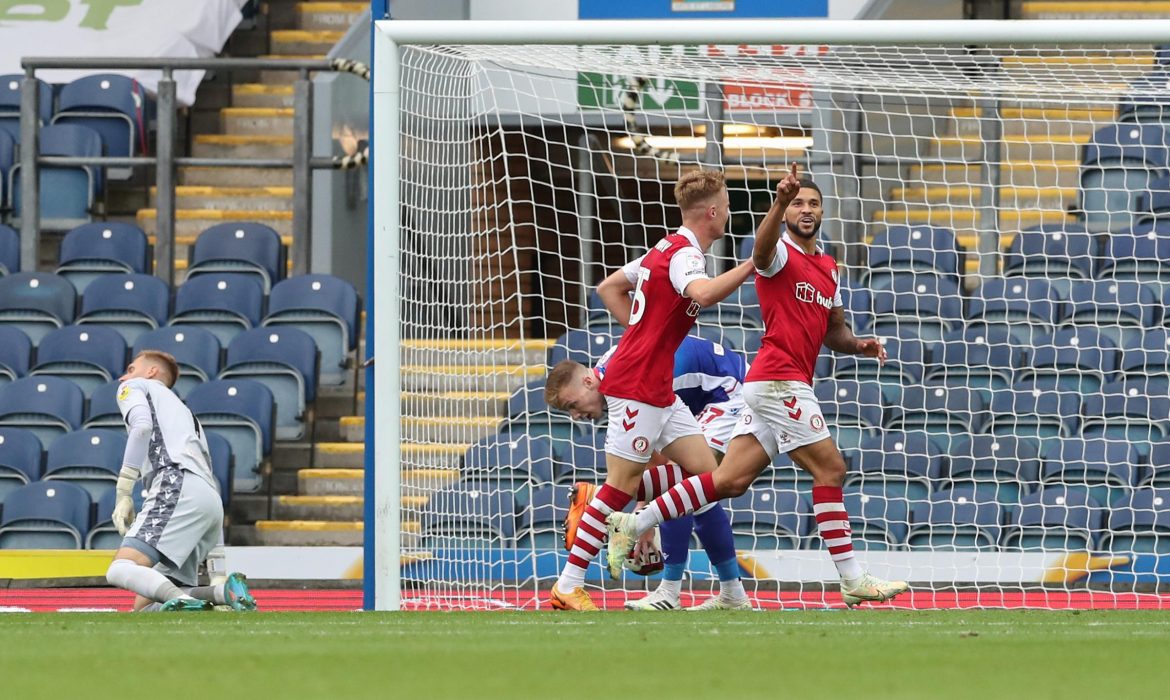 Rovers fell to their second successive home defeat, as Nigel Pearson’s vibrant Bristol City team put in an experienced, well-drilled shift to leave Ewood Park with all three points, as they notched their third away win in their past 20 games – with their second coming at Ewood Park last campaign.

Following Rovers’ narrow 1-0 win over local rivals Blackpool, on Wednesday night, Jon Dahl Tomasson made one change to the winning team, by introducing new loan signing, George Hirst into the fray for his home debut, at the expense of Tyrhys Dolan who dropped to the bench. Deadline day signing, Clinton Mola was available from the bench after joining from VfB Stuttgart on Thursday. There was a third consecutive start for Bradley Dack, who was making his 300th career league appearance this afternoon.

As anticipation built ahead of kick-off, following the good result midweek, it was Bristol City – backed by around 600 fans – who got the ball rolling for this clash, as they looked to notch a rare away win, at a ground that has been rather favourable for them in recent years, having only lost once in their last seven trips to Ewood Park, before today.

Rovers nearly found themselves ahead inside the first 60 seconds. A ball down the right-hand channel saw George Hirst power forwards to latch onto it. He found Bradley Dack with a low cross which was parried by Daniel Bentley, but only as far as the unmarked Ryan Hedges, who couldn’t slam his brakes on in-time, as the ball somehow bounced off his head and over the bar in a comical fashion.

In the 7th minute, Adam Wharton was booked by referee Tim Robinson, after the official had played an advantage for the visitors, following a late challenge by the young 18-year-old.

The Bristol City advantage saw them win a corner, which saw Robert Atkinson connect with the cross, but the central defender couldn’t keep his nod down.

The 18th minute saw Andreas Weimann try his luck at goal after Atkinson made a darting run down the left and found the former Aston Villa forward, but last season’s joint-second-top-scorer couldn’t find the target.

Bristol City were soon on the attack again in the 26th minute when Kal Naismith’s corner found the head of Nahki Wells, but the Bermudan’s header curled wide of the mark.

Less than a minute later, the Robins were again clipping the ball into the box via a corner, but this time, Naismith was on the end, rather than delivering, but he also failed to test Thomas Kaminski.

After half-an-hour, Bristol City were again storming forwards as Jay Dasilva’s cross was met by Zak Vyner, but another Robins header fell straight into the palms of Kaminski.

With the visitors dominating most of the proceedings in the first-half, it took until the 37th minute for Rovers to really get back into gear as Ben Brereton Díaz, Ryan Hedges and George Hirst all combined, but the on-loan Leicester City man couldn’t hit the target.

Two minutes later, Rovers nearly found themselves trailing for the second successive home game, as a ball across the face of goal was tapped goal-bound by former Burnley forward, Nahki Wells, but was denied by the feet of Thomas Kaminski who made an outstanding save.

Sadly, for the hosts, they did find themselves behind in the 42nd minute when a well-worked Bristol City move saw it end with Andreas Weimann claiming an assist, as he found the head of Tommy Conway who nodded home at the back post to claim his sixth of the season. After winning the ball back, the visitors broke with speed down the right as the Austrian clipped a ball to the far-stick which gave Conway the perfect opportunity to head home and give Nigel Pearson’s side the 1-0 advantage.

As the visitors were on the ascendency, referee Tim Robinson only added on one minute of time onto the end of the game, as the first-half was ended with frustration and impatience spreading around Ewood Park.

Jon Dahl Tomasson would have spent half-time trying to come up with a gameplan to try and stop the Robins, who had looked fitter, sharper and more experienced that Rovers’ young side. The visitors had stretched Rovers to their limit and had taken advantage of their injuries, targeting skipper Lewis Travis, who was in an unfamiliar right-back position.

Nigel Pearson would’ve been delighted with his side’s first-half display, regardless of the fact they had entered the break with the lead. The ex-Leicester City boss would’ve been encouraging more of the same from his players who would have entered the dressing room on a high following a fine first 45 minutes.

Before Rovers got the second-half underway, Jon Dahl Tomasson sanctioned two changes, as Ryan Hedges and Bradley Dack were withdrawn and replaced by John Buckley and Tyrhys Dolan, in an effort to change the balance of the game.

Bristol City started the second period, exactly where they left off in the first, by peppering Rovers’ goal. Wells had two bites of the cherry, with his first outside of the box effort being parried by Kaminski, before he followed his own rebound with a header that fell wide.

Rovers finally had a shot at goal in the 55th minute as Tyrhys Dolan cut inside and tested the reactions of Daniel Bentley who produced a simple save.

That save proved catalytic for a counter-attack, as within seconds, the ball had made its way up the other end. Andi Weimann was again the glue that kept the Robins together as he carried the ball before finding Wells with a defence splitting pass that saw Rovers on the ropes. The Bermudan then sold Hayden Carter a dummy before finding the bottom left-hand corner of the net to send the Robins in the away end into raptures at 2-0.

The game’s second and third booking soon came out, as Matty James and Alex Scott were both booked for separate incidents, moments apart from each other.

Four minutes later, Harry Pickering was booked for hauling down Mark Sykes. After Rovers won the ball back from City’s free-kick, they burst out of the traps as Vale and Brereton Díaz countered, but the Chilean’s final effort missed the target by some distance.

Edun had an instant impact, as he helped Rovers get back into the game by supplying the assist for fellow substitute, Tyrhys Dolan as Rovers reduced the deficit. After picking the ball up midway inside the City half, Edun slid Dolan in, before the former Preston North End man took a touch to fashion an opening before firing past Daniel Bentley to reduce the arrears to 2-1.

As Ewood Park’s atmosphere became a cauldron of noise, Nigel Pearson’s men soon turned the gas off, as they soon managed to recreate their two-goal buffer, just three minutes later. Kal Naismith got on the end of a City free-kick, but the former Wigan Athletic man’s header cannoned back off the post before Wells tried to slot home, before being stopped by a magnificent save from Kaminski. Despite a follow-up being cleared off the line, Tim Robinson, the official, pointed to his watch to signal that goal-line technology had granted Wells’ finish, with the Belgian keeper’s effort being in vain, as Bristol City celebrated a 3-1 lead, much to the confusion of the home support.

Nahki Wells’ afternoon was over by the 87th minute as he was replaced by Joe Williams, with the Bristolians looking to see out their lead to gain another three points.

With 90 minutes on the clock, Tim Robinson signalled for five minutes, which saw a roar of encouragement from the home crowd, who willed their team forward, but not before another change by the visitors in the 91st minute saw Han-Noah Massengo replace the very impressive Alex Scott.

That encouragement paid off as Ben Brereton Díaz notched his second goal in successive games, as after Tyrhys Dolan rode a challenge on the edge of the area, he slid the Chilean through on goal, who then had the composure to curl the ball past Bentley for 3-2, as Rovers continued to push in hope, rather than expectation.

Said hope soon faded moments after the restart, as Tim Robinson called time on a game, that looked closer on paper than it was on the pitch, as Nigel Pearson’s Robins ran out deserved winners.

‘Lacklustre’ seems like a fitting word to describe a very sub-par performance. Rovers lacked any real creativity going forwards, on the whole, and failed to stamp their authority on the game in a similar way they had done in midweek. Jon Dahl Tomasson’s midfield looked exposed with the composure and experience of Andi Weimann dropping and pulling the strings, alongside Alex Scott, whilst the exuberance of Tommy Conway and the pace of Nahki Wells dragged Rovers’ defenders into areas they didn’t want to be in. Whilst Rovers arguable won on Thursday by adding Clinton Mola and keeping hold of Ben Brereton Díaz, it seemed as the excitement around the club took over and Rovers were ‘drunk’ on their own happiness, as they failed to put in a real performance for 70 minutes of the contest, particularly in the first 45 minutes – an issue which we have seen more than once this campaign.

Despite defeat, Rovers are still in the playoff spots, as they sit 6th with 12 points and a negative goal-difference of -2, after eight games have been played. Funnily enough, Rovers have yet to draw a game and it’ll be interesting to see how long that run potentially goes on for.