Sign in
Home Transfer News Tyler is a Blue! 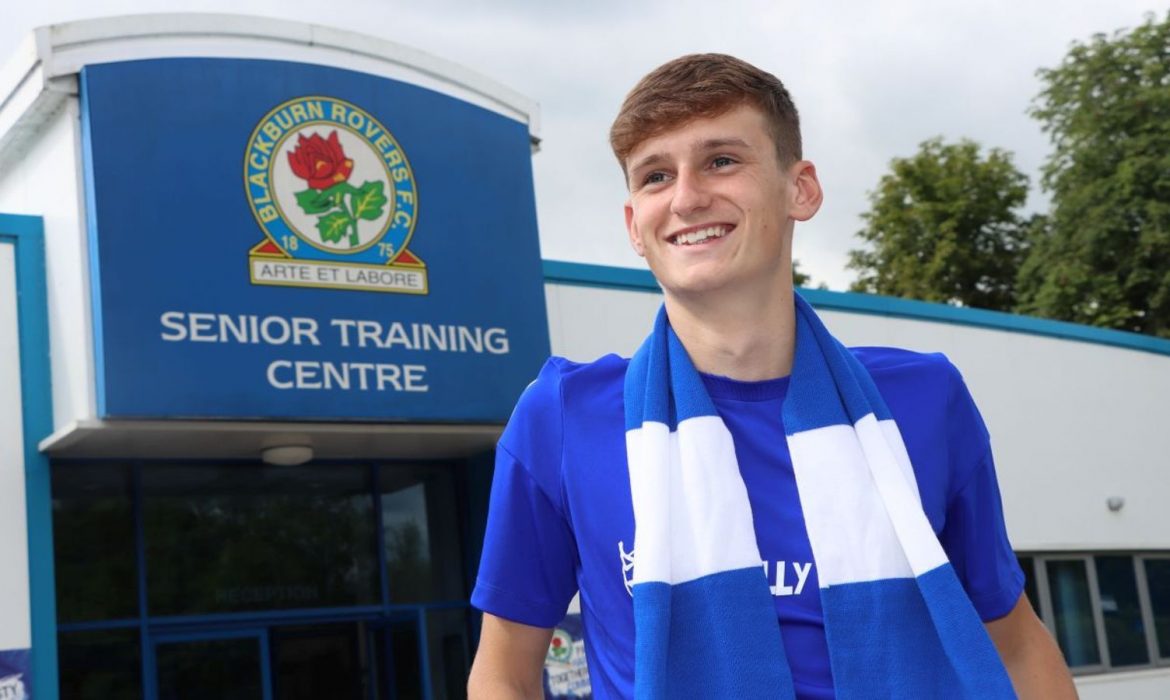 Rovers have secured their second signing of the Jon Dahl Tomasson-era by adding promising Liverpool midfielder, Tyler Morton, on a season-long loan.

The 19-year-old midfielder is the second new addition to come into Ewood Park, following the permanent acquisition of full-back Callum Brittain, who joined from League One oufit, Barnsley.

Morton, who has been highly-tipped for success at Anfield in the future, arrives at Rovers for the campaign and has high pedigree that made him a vital capture for Jon Dahl Tomasson. After penning a new Liverpool deal in January 2021, the midfielder, who has been at Liverpool since the age of seven has caught the eye of many managers and fans alike, following his brief, but impressive breakthrough into the Liverpool first-team last season and has been able to build on his fine cameo appearances, by being offered the opportunity to ply his trade at Ewood Park for the upcoming campaign.

Despite only making his debut for Liverpool’s under-18s in 2019-20, Morton has had a meteoric rise to the top of the Liverpool ranks, as he went onto play under-23s football in 2020-21, before making his mark on the first-team in 2021-22, meaning he stormed through the age brackets in just two years of development.

Since making his Liverpool debut in last season’s Carabao Cup Third Round 3-0 victory away at Norwich City, the midfielder went on to start in the following round, as Liverpool would ease past Rovers’ Lancashire rivals, Preston North End, who won by a 2-0 scoreline. After impressing in those domestic cup clashes, Morton was entrusted with Champions League appearances, as he started back-to-back Champions League victories against FC Porto and AC Milan, playing at the San Siro, before capping off a fine first-half of last season by making his full Premier League debut in a 2-2 draw away to Tottenham Hotspur in December 2021.

Whilst his domestic exploits are known to anyone up-to-date with the Premier League and Champions League, Morton’s international success may not be as familiar. The creative midfielder has had recognition by his country, making his England under-20 debut in November 2021, which came in a 2-0 defeat to Portugal in the 2021-22 Under-20s Elite League, in an England squad that contained the likes of former Rover, Leighton Clarkson, highly-rated Manchester City duo, James McAtee and Morgan Rogers and now-Rovers teammate, Tyrhys Dolan.

After following the footsteps of fellow loanees, Harvey Elliott and Leighton Clarkson, Tyler Morton will be hoping to make a similar impact to the previous two Liverpool loanees, both in Blue and White and eventually in the famous Anfield Red, once he returns to Merseyside.

Morton revealed his enthusiasm at joining Rovers, after putting pen-to-paper on the year-long move:

“I’m absolutely buzzing and I can’t wait to get going at such an historic club It’s really exciting for me and it was a very easy decision for me to make. As soon as a club with this stature comes in for you it’s something that excites.

“I was desperate to get the move over the line. I’m very happy to be a Liverpool player but I need this experience to come and play for such a club like Rovers. It’s a massive thing for me to come here and I’m looking forward to showing the fans, the Head Coach and my new team-mates exactly what I’ve got. I’d love to get my career started and see where it takes me.

“Speaking to Harvey and Leighton, they gave a real positive impression about the club and they persuaded me a bit more to come here, not that I needed much persuading. I’ve heard nothing but positivity from them about the place. I want to follow in their footsteps, play games, get experience and look to kick on.”

Following the capture of the Merseyside man, Rovers Director of Football, Gregg Broughton and Head Coach, Jon Dahl Tomasson both expressed their delight at the loan signing.

Broughton: “We have had to wait patiently for Tyler, as he has been so close to Liverpool’s first team for the whole of pre-season, but after seeing what he did in some big games for Liverpool last year, we believe he was worth waiting for. Strategically we knew we needed to add another central midfielder to the squad for this season and a loan suited us ideally to ensure we didn’t block the medium-term pathways of some of our own young midfielders who have done so well for us over the last eight weeks.

“We are very grateful to Liverpool for trusting us with the continued development of a player who is rated so highly at the club.”

Tomasson: “Tyler’s a young boy with a lot of talent. He’s played Champions League football for Liverpool and that shows the trust that Jurgen Klopp has in him. He played against AC Milan last season, he also played against Porto and did a good job in both games.

“He’s still a young boy and is one of the players who Liverpool want to get in their team in the years to come. For Liverpool, this is an important loan, and he has to deserve minutes with us. He has quality on the ball, he wants the ball and is equally comfortable playing in defensive midfield or central midfield positions. He’s good at reading triggers, he knows when to press and when not to press, he sees the right passes and takes very few touches. He sees the game and is a clever player.

“If a manager like Klopp, an excellent manager who’s one of the best in the world, trusts someone at Tyler’s age, that’s really positive. I’ve spoken with the assistant manager at Liverpool, a Dutchman (Pep Lijnders), who has only said positive words about him. We know all about his personality, how he is as a person, the family situation, it all sounds perfect to us.”