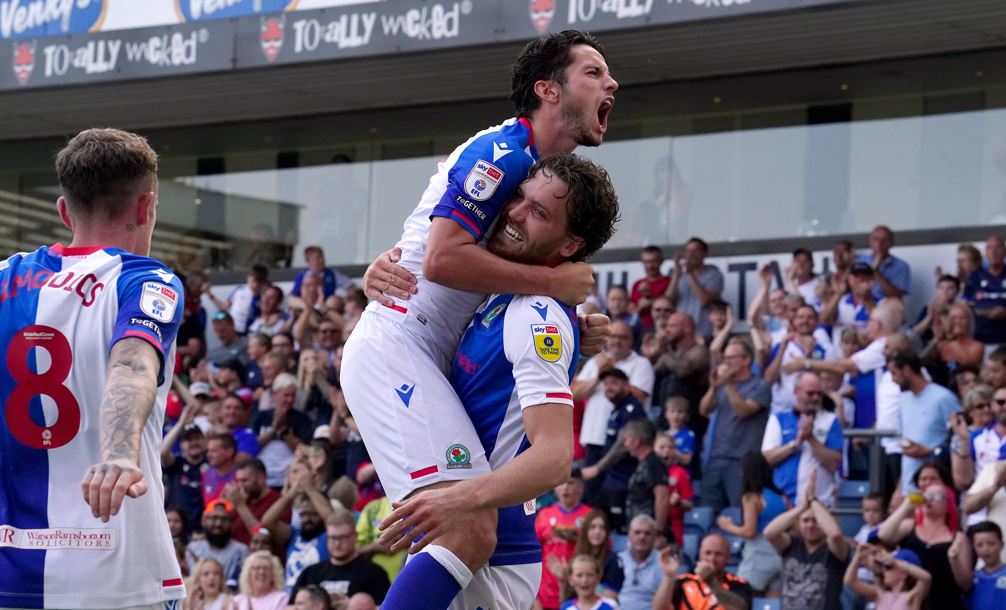 The perfect start continued for Rovers and Jon Dahl Tomasson, as despite losing their clean-sheet for the first-time this campaign, they managed to survive a late West Bromwich Albion scare to tally up nine points from three league games and end the third round of Sky Bet Championship fixtures, top of the pile.

As Rovers prepared for their second successive game on the hallowed Ewood Park turf, after beating Hartlepool United, 4-0 in midweek in the Carabao Cup, boss Jon Dahl Tomasson made one change to his team from the side that ran out comfortable 3-0 winners against Swansea City, in Rovers’ last league game. Ashley Phillips looked to build on his first senior start for Rovers and was awarded the chance to make his league debut for the club after Scott Wharton missed out with a calf issue.

With the fans eager to see whether Rovers could continue their fine early start to the season, it was Sammie Szmodics who got the game underway following the referee, Josh Smith’s whistle at 3pm, sharp.

After 120 seconds had been played, West Bromwich Albion nearly opened the scoring after Jed Wallace’s corner was delivered onto the head of Semi Ajayi, but the former Rotherham United defender couldn’t angle his nod on target.

In the 5th minute of the game, Sam Gallagher was booked for infringing upon Conor Townsend.

Four minutes later, Rovers’ tails were up as they managed to get beyond Albion’s backline. Callum Brittain served up a fantastic ball into the path of Ryan Hedges who cut the ball back into the six-yard-box. The confusion nearly saw Albion turn the ball into their own net, but Ben Brereton Díaz was bundled down under the pressure, however Mr. Smith waved away the protests.

After a quiet period of play, Albion again went forward, but this time in the 17th minute as Wallace again looked to cause havoc with a cross into the box, but Grady Diangana’s header at the back-post failed to trouble Thomas Kaminski as it dropped wide.

Play was paused in the 26th minute for a brief water break in an attempt to combat the 30°C heat that had miraculously engulfed the town of Blackburn.

In the 37th minute, John Swift became the first Albion player to be booked after he clattered into John Buckley from behind.

Jed Wallace was looking the liveliest player for the visitors, as he tried to put one in from long-range, but his accuracy was lacking as Rovers were awarded a goal-kick.

The breakthrough finally came in the 41st minute, and it came for the home side as Ben Brereton Díaz doubled his tally for the season to two following a fine build-up by the Blues. Callum Brittain delivered an inviting ball from deep into Sam Gallagher, who received the ball and did brilliantly to tee-up the Chilean who was lurking on the edge of the area. The attacker cut past a defender and lined up the effort in his brain and managed to curl a left-footed effort that seemingly blindsided David Button, as the ball curled into the bottom corner to give Rovers a 1-0 lead.

One nearly became two in the 44th minute as Szmodics and Hedges combined, but the latter’s cheeky chip over the Albion goalkeeper failed to dip enough to sneak in under the crossbar.

As the break drew near, Josh Smith added on a minimum of three minutes onto the end of the first period which soon whizzed by as the whistle blew with neither side mounting a charge in the additional time.

Jon Dahl Tomasson would have been delighted that his side had managed to stave off a couple of Albion efforts and go into the break with the lead. The Dane would have been encouraging his players to keep their spirits high and remain focussed as West Brom’s quality would undoubtedly begin to rear its head in the second 45 minutes. Tomasson would have also been delighted with how Rovers had been defensively, especially given 17-year-old Ashley Phillips was making his senior league debut.

Steve Bruce, in the opposition dressing room, would have had mixed feelings, given his side had started the game brightly, but ended the half on the backfoot. Although the Baggies had more of the possession and the overall attempts at goal, they had failed to really test Thomas Kaminski, who was in between the Rovers posts. Bruce would have been looking to encourage his sides to elevate their quality in the second-half in order to increase the pressure on the hosts.

As both teams returned for the second-half, it was Albion who got the game underway, as they were looking to pick up their first league win of the season and stop Rovers from winning their opening three league games for the first time since 1988-89.

Just seconds before play was restarted, Rovers made their first switch of the game, as Tyler Morton was introduced in place of Callum Brittain who had picked up a knock in the first-half and was unable to continue. That switch saw John Buckley shuffle over to right-back, with Morton partnering Travis in the centre of the park.

Moments after the start of the second period, Rovers managed to double their lead in brilliant fashion as Sam Gallagher almost replicated his strike partner’s goal down the other end of Ewood Park. After some lovely interplay down the left-hand side, as Tyler Morton and Brereton Díaz combined with a one-two before the Chilean carried the ball forward and picked out Gallagher on the edge of the area, who equally matched Brereton Díaz’s left-footed finish, leaving David Button with a sense of déjà vu, as Rovers took a 2-0 lead.

In the 52nd minute, the Chilean looked to try and treble his tally for the campaign and Rovers’ tally for the day, but his right-footed effort lacked the accuracy of his weaker left-foot, as his attempt veered wide of the mark.

Five minutes after Brereton Díaz missed, West Brom went up the other end and tried to force themselves into the back of the Rovers net, but some outstanding defensive play by Ashley Phillips saw the Albion efforts blocked to keep Rovers’ clean-sheet intact.

Sadly for Rovers, they were unable to stave off opposition goals for the fourth straight game, as Grady Diangana breached Rovers’ backline after being assisted by a huge deflection. After picking up the ball on the edge of the area, the former West Ham United man weaved some magic by jinking past his marker and releasing a shot that wildly deflected away from Thomas Kaminski, wrongfooting the Belgian before trickling into the back of the Rovers net for 2-1.

Nine minutes later, Rovers were forced into a second change, as Ash Phillips was unable to continue, with Tayo Edun replacing him as Harry Pickering tucked into centre-back for the final 19 minutes.

Rovers made their third and fourth changes of the game in the 75th minute as Bradley Dack and Tyrhys Dolan came on to give Rovers some fresh legs, with Sams Szmodics and Gallagher making way.

In the 77th minute, John Buckley was booked following a rough challenge.

A minute later, Bradley Dack saw his shot blocked, before Tyler Morton’s follow up veered wide of the mark.

As the intensity increased, West Brom burst forward looking for an equaliser. Diangana’s cross landed for Karlan Grant, but Thomas Kaminski pulled off a fantastic save to keep Rovers ahead.

In the 89th and 90th minutes, Bradley Dack and Lewis Travis were both booked for a mixture of dissent and timewasting in two separate incidents.

As the 90th minute ticked over, Josh Smith decided to become Public Enemy Number One in Blackburn, by adding on 11 minutes of added time, onto the end of the game.

In the first of the 11 minutes, West Brom made another change as Adam Reach replaced John Swift.

Hearts were firmly in mouths by the 98th minute as Jed Wallace and Semi Ajayi again combined, but once more, the defender failed to angle his attempt from the set-piece, on target, as Rovers were given a goal-kick.

After all the agony and time-wasting, the game was finally brought to a conclusion after the clock surpassed 100 minutes of play, as Josh Smith blew for the final whistle which, not only saw the roof blow off Ewood Park, but saw Jon Dahl Tomasson continue his unbeaten start to life as Blackburn Rovers Head Coach.

This game laid down a marker for Rovers this season and highlighted the mentality that the players and the staff now have under the new regime. Too many times in recent years, Rovers would have crumbled after conceding the first goal and would have gone onto draw the game – or worse – and the tactical nous to see the game out, with the changes as well as the retaliation to the enforced injuries showed that Rovers are a different animal this campaign, although it is still very early days. The defensive unit all have to be commended for their resilience in keeping a very potent attacking line-up at bay and although they were unable to keep their clean-sheet intact for a fourth successive game, the manner in which the goal came about, via the deflection, proves that the defenders are willing to put their bodies on the line for the team and the fans.

After picking up a maximum nine points, Rovers now find themselves in nose-bleeding territory, as they sit top of the pile, in 1st place after three games. Jon Dahl Tomasson’s men sit with a positive goal-difference of +5.

Following a fine display, Rovers won’t have long to wait for their next outing, which is in three days, as they travel to Berkshire to face Reading on Wednesday 17th August at 8pm. Once they return from down south, they’re on the road again, as they take the trip across the Pennines to face Sheffield United at Bramall Lane on Saturday 20th August at 3pm. After those two league fixtures, attentions then turn to the Carabao Cup Second Round and the renewal of acquaintances as Jon Dahl Tomasson and his men remain in Yorkshire, but travel to Bradford City to face former Rovers boss, Mark Hughes, who has ex-Rovers Richie Smallwood and Harry Chapman among his ranks.