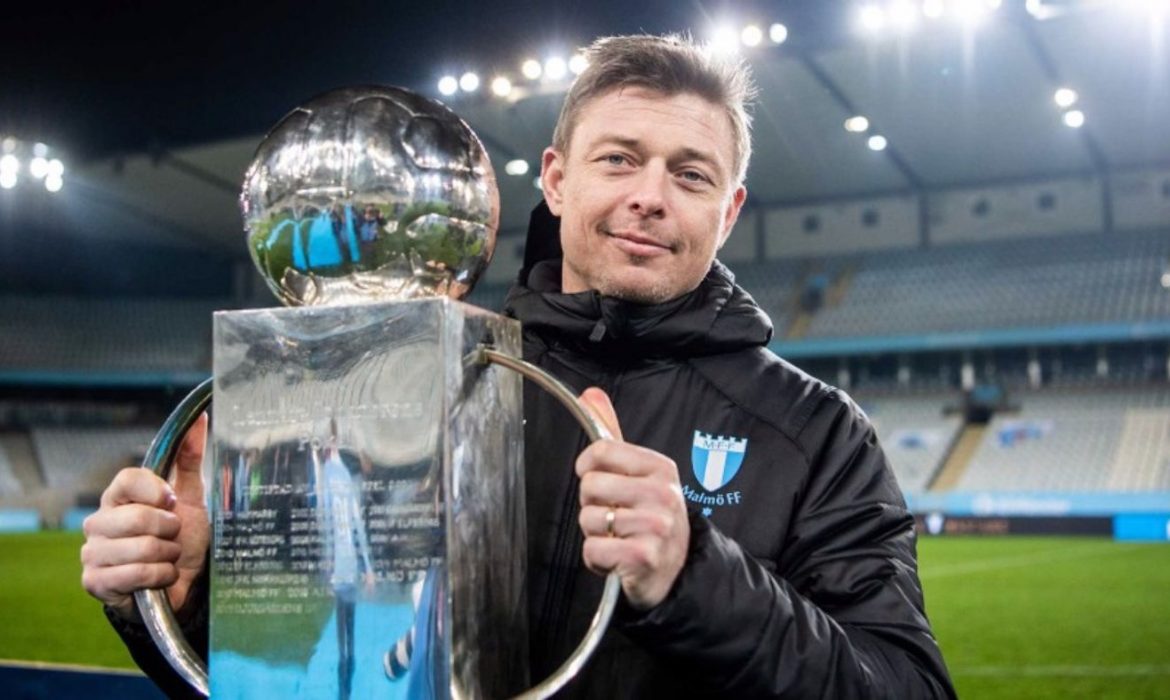 Following an incredibly long managerial search that totalled to over 60 applications, Rovers have finally narrowed down their hunt for a new leader, by appointing Denmark’s joint top-scorer and former AC Milan forward, Jon Dahl Tomasson as the club’s new head coach.

After a fabulous playing career, that saw the Dane capped 112 times for his country and played in over 450 games across six different countries, where he totalled over 530 games and 190 goals, Tomasson tried his hand at management following his retirement in 2011 and held three jobs prior to making the move to Ewood Park ahead of the 2022-23 season; linking up with the East Lancashire club on a three-year-deal, until 2025.

After coming through the youth ranks in his native Denmark, Tomasson would start his career professionally, at Køge Boldklub – who in 2009 merged with Herfølge Boldklub to become current Danish Second Tier side, HB Køge. During his two-year stint at Køge, Tomasson led the coastal club to successive promotions up to the Second Tier in Danish football, netting 28 goals in 48 games after making his senior debut at just 16-years-of-age.

One he turned 18, Tomasson left Scandinavia to pursue a career in mainland Europe, as he signed for Eredivisie side, SC Heerenveen in 1994 just after picking up the 1994 Danish under-19s Player of the Year. His gamble at such a young age proved successful, as he ended his first year at the Friesland club as top scorer in 1995-96, before replicating the tally the following season, at the end of 1996-97, going from 14 goals to 18 goals in both respective seasons. His talents were recognised midway through his second season in the Netherlands, as he piped future Premier League stars and Dutch internationals, Boudewijn Zenden & Patrick Kluivert to claim the prestigious award.

After only two years in the Netherlands, Tomasson did earn the opportunity to test himself in the Premier League, as Rovers’ title-winning manager, Kenny Dalglish brought the forwards to the north of England, but to Newcastle United in the summer of 1997, as he aimed to use the Dane as a perfect pivot for another Rovers title-winner, in Alan Shearer. Despite a promising start at St. James’ Park, a season-ending injury to Shearer saw Tomasson forced to play a lone striker role, which he struggled with, ending his only season in England with four goals from 35 games.

His underwhelming stint in England unfortunately saw him miss out on the 1998 Denmark World Cup squad, however the now-22-year-old attacker did find success upon his return to the Netherlands, prior to the 1998-99 Eredivisie season. With the #10 shirt on his back, the Dane picked up a domestic double in his first season as Feyenoord went on to win the Eredivisie and the Dutch Super Cup. From 1999 to 2002, Feyenoord failed to recapture their title glory but finished in the top three, however Tomasson finished as the Eredivisie top-scorer in 2000-01 with 15 goals, before notching 17 in 2001-02. Towards the end of the campaign, Feyenoord captured the 2001-02 UEFA Cup with Tomasson picking up the Man of the Match Award in the final. His outstanding performances in the Netherlands did earn him a spot on the plane for the Japan and South Korea 2002 World Cup, as he ended the tournament as the third-highest scorer, picking up the Bronze Shoe with four goals in the tournament, tied with Italy’s Christian Vieri, as Denmark fell in the Round of 16 stage, against England.

After his international success, Tomasson failed to agree a new deal at Feyenoord and moved to Carlo Ancelotti’s AC Milan, where he had three very successful years, picking up a Serie A title, a Coppa Italia, Supercoppa Italiana, as well as a continental double of the 2002-03 UEFA Champions League and the 2003 UEFA Super Cup. Tomasson’s trophy haul in Milan was coupled with some fine individual displays, as he notched 12 Serie A goals in 2003-04 enroute to his only Serie A title with the Rossoneri. After winning the league, Tomasson went on to have a brilliant Euro 2004, as despite the Danes being knocked out in the Quarter-Final, Tomasson made it into the 23-man UEFA EURO 2004 All-Star Squad. At the end of the 2004-05 season, Tomasson collected a silver medal, as AC Milan finished as runners-up in the 2005 Champions League Final. As the Dane’s time in Italy came to an end, he was deemed surplus to requirements and moved to VfB Stuttgart in the summer of 2005.

Tomasson’s stint in Germany started slowly, as despite finishing as the side’s top goalscorer in his first season, with eight goals, they finished in mid-table. 2006-07 ended more prosperously for the Dane and for Stuttgart as they were crowned Bundesliga champions, yet Tomasson’s season was hindered by injuries as he only played four games for the German side in that campaign. As Stuttgart went on to be crowned champions, Tomasson spent the second-half of 2006-07 in Spain, at Villarreal to regain his fitness and provide cover for the ‘Yellow Submarines’, which led to him becoming only the fifth player to have played a game in the Premier League, Serie A, Bundesliga and La Liga. After four goals in 11 league games, his temporary spell was turned permanent in the summer of 2007, as he went on to notch five goals in eight UEFA Cup games, as the Spaniard reached the Round of 32 of the 2007-08 edition of the competition. In July 2008, following an underwhelming time in Spain, Tomasson returned to former side Feyenoord on a free transfer, as he resurrected his career following a poor couple of years where he struggled with injury. His final three seasons back in the Netherlands were rather successful on a personal note, despite Tomasson being in his mid-30s. After moving back to the club in 2008, he wrapped up his career three years later in 2011 after netting 22 goals in 44 appearances in Rotterdam.

The Dane’s international career would make many footballers envious, as despite not helping his side to an international title, he remains as Denmark’s joint-top-scorer of all time with 52 goals, alongside Ppoul Nielson. He also represented his country at four major tournaments between 2000 and 2010, before retiring from the national team following the 2010 World Cup, bowing out after netting Denmark’s final goal at the tournament which came in a 3-1 defeat to Japan.

Following his retirement, Tomasson moved to earn his coaching badges by remaining in the Netherlands and picking up his first job as assistant at Excelsior Rotterdam. After two years as a right-hand man, Tomasson was given the main job in 2013-14, but departed in December 2013, as Excelsior pushed on in 2014 to get back into the Eredivisie via the Ereste Divisie playoffs. Whilst Excelsior went on to achieve success, Tomasson was poached by Roda JC in the Eredivisie, but despite only being at the club for half a campaign, the Dane failed to steer the side away from relegation, which led to Tomasson’s contract being terminated in the summer of 2014.

After his spells as number one, Tomasson went back to being an assistant as he became the number two at Vitesse Arnheim in June 2015, but after 10 months in the job, the Dane left the Netherlands to become his nation’s assistant coach, as he joined up with the Denmark side in March 2016, linking up with former Manchester City and Norwich City defender, Åge Hareide. Tomasson would stay with his nation for four years, overseeing Euro 2016 and the 2018 World Cup and two games as an interim – a goalless draw with Georgia and a 6-0 win over Gibraltar during the Dane’s Euro 2020 qualifiers – before departing in late 2019.

On 5th January 2020, signed a deal to be Swedish side, Malmö FF’s new manager and proved to be an instant success as he guided the side to their 21st Swedish Championship. Tomasson did manage to guide Malmö to an undefeated season on home soil as the Sky Blues failed to lose a game on home turf all campaign as not only did Tomasson lead Malmö to the league title, but to the Champions League for the first time since 2018-19. Furthermore, Tomasson also took Malmö far in Europe during his first season, as he guided them to the Round of 32 in the 2019-20 Europa League, before losing 5-1 to Wolfsburg on aggregate. 2020-21 wasn’t as fruitful in the Europa League, as they failed to make it into the group stages, losing 3-1 to Granada in the final qualifying round, after beating Polish side KS Cracovia, Hungarians Honvéd and Croatian outfit Lokomotiva Zagreb.

Following success in his first season, Tomasson was able to replicate that in his second year in Sweden as he made it back-to-back league titles for Malmö, which last happened in 2016 and 2017. Whilst his second and final season in the Allsvenskan proved successful, despite being unable to replicate the previous season’s unbeaten home record, Tomasson did guide Malmö into European competition. After four rounds of playoffs and overcoming Latvian side Riga FC, Finnish side HJK, Scottish giants Rangers, and Bulgaria’s Ludogorets Razgrad, Malmö made it back into the Champions League Group Stage after a couple years of absence, with their last appearance in the group stages coming in 2018-19. Although Malmö powered through the preliminary rounds, their group, which consisted of Italian stalwarts, Juventus, reigning European champions, Chelsea and Russian side, Zenit Saint Petersburg, Malmö finished with the wooden spoon as they only picked up a point, which came at home to Zenit.

Whilst Tomasson brought success to the Swedish side, he departed the club after securing his second league title and losing to Juventus, 1-0, in their final Champions League game of the season.

During his stint at Malmö, Tomasson became known for his tactical astuteness and being able to adapt to his opposition, whilst prioritising attacking football. Although he spent most of his first season utilising a 4-3-3 system, his second season saw a wider variety of formations used, with three defenders becoming a base in which Malmö could build off, as they utilised their wing-backs to the fullest extent

After departing Sweden, Tomasson had been linked to many jobs across Europe, but has decided to take on the challenge at Ewood Park, in the newly formed ‘head coach’ role alongside new assistant coach Remy Reijnierse and performance director Ben Rosen, as Rovers look for a route back to the Premier League, following a decade away.