Sign in
Home First Team News “There are only bright days ahead for Blackburn Rovers Football Club.” 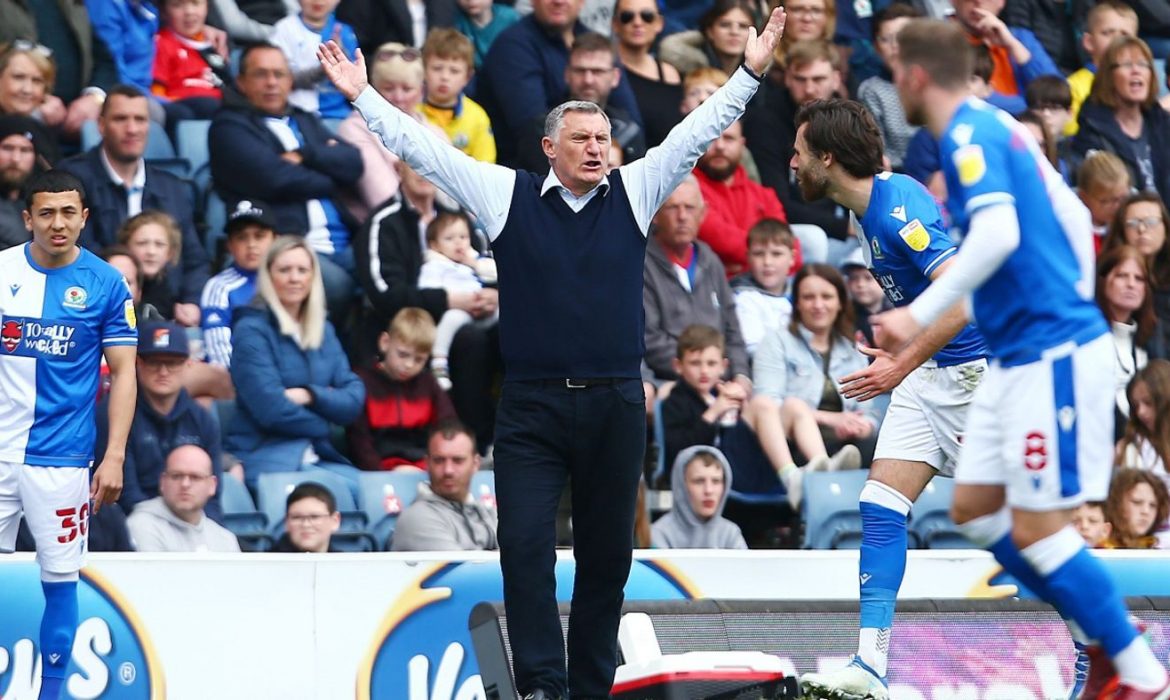 Following Tony Mowbray’s final home game at Ewood Park, as Blackburn Rovers manager – a game which his side lost 3-0 to promotion chasing AFC Bournemouth – the manager emotionally discussed his team, alongside his personal future and that of the football club.

“We’re disappointed and frustrated with the result and I apologise to the fans who turned out brilliantly today, in their numbers. I’m proud of the fans for voicing their commitment to Blackburn Rovers. That’s what they need to do, through thick and thin. As long as they feel that their team are fighting, working, chasing and giving their all, sometimes you play against better teams, but this group will always fight and work hard for the badge. I know we’ve already beaten Bournemouth this season, but today we came up against a better team than us, who have some high-quality players. Both teams had some opportunities to score today, ours didn’t go in and theirs did. Sometimes you have to accept it when you play against good football teams who can hurt you, because the more you try to be attacking to try and win a game, you leave yourself that little bit more exposed and become more vulnerable and I think that’s what happened today.

“We’ve had some success this season playing with three at the back and having extra bodies back there to put a final block in. We’ve been playing the last couple of games with a back four and sometimes, when you commit a few more men forwards, you leave a lot of holes and against the quality of Bournemouth you can get punished, which they did to us today. Saying that, I can’t question the desire of the team, but we needed one of those chances to go in, to be honest.

“Today felt like it summed up the second-half of this campaign, a bit. I think the main thing about this football club is that I feel it’s moving in the right direction. It might not feel that way right after this game, after losing against a team who’ll probably be playing in the Premier League, next season. It shouldn’t be a disgrace to lose to such a well-organised and strong team, but I think the club needs to keep trying to move forward. I do feel like there’s been some progression, from the relegation to bouncing back and trying to build a team over the past few years. I have to publicly thank the Owners supporting me with the funds to buy the likes of Adam Armstrong, Ben Brereton Díaz, Joe Rothwell and Sam Gallagher. During that building process, COVID hit the world and the Owners and it hindered the club’s ability to keep investing in quality footballers that would, at some stage, give the club a much better chance to progress, in my opinion. We have relied pretty heavily on loans over the past few years, but the loans go back and move on at the end of the season, the likes of Tosin Adarabioyo and Harvey Elliott to name a few. They come, do really well here and then they move on. At some stage, I hope the club can get back to a stage where they can invest money into permanent players, like we were a few years ago, when we signed Gallagher, Brereton Díaz and Rothwell and players like that.

“How are they going to get back to that stage? Maybe Brereton Díaz needs to be sold in the summer, as he heads into the last year of his contract, and maybe the money needs to be reinvested to keep the budget working, to give the new manager a chance to buy the quality that’ll help this team progress. With better players, it’ll help the young players like John Buckley and Scott Wharton develop into the quality players we know they can be. Those youngsters need supporting and they need quality around them to set the standards for them. Hopefully the right investment and the right recruitment will help the club keep moving forward.

“My future’s pretty clear. I think today’s game was my last one at Ewood Park. I’d like to finish the season at Birmingham City, next week, but again, I don’t know what the executives and ‘men in suits’ are going to do, whether they want to curtail my tenure now after this game, or wait until after the season’s officially over, I don’t know. I’m looking forward to going home and seeing my three teenage boys. I’m looking forward to kicking a ball around with them in the garden, going golfing and taking my wife out for nice dinners, then I’ll see what the summer brings. I’ve got no intention of hanging up my ‘managerial boots’. I will see what is out there in the summer and decide then. Football management is cyclic. You get to October and some teams aren’t doing very well, so a load of jobs come up and it’s the same in January. I want to wait and see, but it’s not in my personality to hawk around at grounds watching games thinking that the manager’s in trouble. I have enormous respect for every football manager, because I know how tough the job is. But the reality is that there’ll be another job somewhere down the line and I’ll weight up all the necessary factors when the time comes. Of course, I’d like to manage a team with the resources that I feel can get to the Premier League. As I’ve said in the past, I’d like to manage in the Premier League before I decide to retire. I think the managerial game is getting harder. The world is full of platforms for people to tell the manager what he’s doing wrong. If you haven’t got a thick skin as a football manager, you’re not going to be very successful. It is getting tougher to do the job, but let’s see what the summer brings for me, let’s see what the club decide what the budget will be next year. If Brereton Díaz is sold, what percentage of that fee will be put back into the team? I wish everybody at Blackburn Rovers, from the staff to the players, to the fans, the very best.

“I’ve just had a twenty-minute chat to the players in the dressing room and it got quite emotional. We’ve still got a week of training left to go and we’ve still got to go to Birmingham and try and get three points to finish the season. The more points we can accumulate, the higher the bar gets set for this group to try and better it. It’s been a frustrating second-half of the season, but I do feel that if this group had by some miraculous way had achieved promotion, it would have been a very difficult scenario for this football club, at this moment. I think the club has to keep growing and developing and it has to find a way of growing its players, keeping the growth mindset going, keep developing, keep working, keeping bringing assets to the club that it can polish up. If they stay on that path, there’s no reason why, somewhere down the line, over the next few years that they can’t be the team that punches above their weight and beat the teams with parachute payments, to the top two.

“I think the genuine Blackburn Rovers supporters out there are the ones who want to stay and clap their team. I feel as if I’ve had a tough time over the last month or so, with the support base, but I felt as if the supporters who stayed and clapped their team after the game, are genuinely Blackburn Rovers fans, who care about those young lads. I said to the team, that I was very proud of watching them play this season. Why do they play the game? They do it for their families, who came on at the end, there. You play football for a living, to supply your children and to try and provide for your family.

“It was good to see the people who stayed and supported Blackburn Rovers. As I said right at the start, it was great to hear the crowd in the Blackburn End singing about how they’ll always support this club. That support, it’s in the blood of a supporter. That’s what I’ve been trying to get across. Football managers come and go, football players come and go, but the fans are the constant life of the club. They do have to support the team through the thick and the thin. These supporters have had a lot of ‘thin’ really, after the incredible highs they had during the 1990s. The fans have had some ‘thin’ times, but they have to stick with the group and keep supporting their team, through the victories and the defeats. I can only see, with the development of the academy and the investment that the Owners put into that academy, there’s a lot of good, young talented players coming through. If they can invest and buy some quality players to help along the way, like they’ve done in the past, then I think there are only bright days ahead for Blackburn Rovers Football Club.”