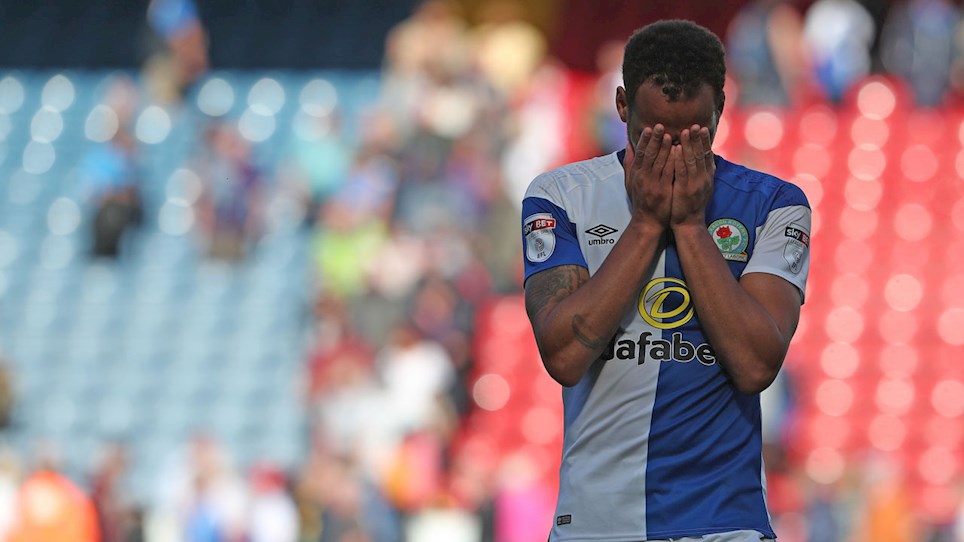 On a sunny Saturday afternoon in the North West of England, the highly anticipated first home game of the season finished in a disaster for Rovers as the visitors triumphed with a 3-1 victory as they successfully executed their ‘smash and grab’ plan.

With “You’re not fit to wear the shirt” ringing out around Ewood Park following Doncaster’s third goal, the first home game of the season couldn’t have gone worse for the Blues as they were put to the sword by newly promoted Doncaster Rovers. A controversial James Coppinger penalty, which was sandwiched in between goals from John Marquis and Alfie May were enough to give Doncaster their first win of the new season.

From a Doncaster perspective, it was the perfect away performance, as despite conceding a goal late on; they were faultless with their counter attacking game plan. However from a Blackburn perspective, the game was one which lacked any tempo, any fight or any real threat at goal, despite Dominic Samuel notching his second goal of the season with a header in the 87th minute, it proved to only be a consolation on a day of disappointment as the home side were well and truly beaten.

Rovers’ team remained relatively similar to the side that beat Coventry in mid-week, with the minor changes of Peter Whittingham and Danny Graham, who were brought in at the expense of Liam Feeney and Dominic Samuel, both of which were demoted to the bench. Additionally, despite much speculation amongst the fans regarding the tactical system that Rovers would use, boss Tony Mowbray retained the 3-4-3 system that worked so well at Coventry City during the week. Furthermore, the anticipated debut of new signing Marcus Antonsson was delayed as the Swedish forward, who signed on a season-long loan from Championship side Leeds United on Friday morning, did not make the squad.

Despite the overall stats showing that Rovers only had 48% of the possession to Doncaster’s 52%, this was an attribute that did not reflect the first half performances, as Rovers dominated the ball during the opening period. In spite of the overwhelming possession that Rovers had in the first half, they were unable to make their large spells on the ball count, as a result of Doncaster’s rigidity.

Rovers’ only had three real attempts on goal in the first half with the first coming from Danny Graham, who had not yet opened his competitive account for the season, despite it already being 3 games in. The move was created following a turnover in possession, in which Corry Evans headed a loose ball through to Graham, who had an open option in Whittingham but the forward decided to shoot himself. The shot was blocked by a defender causing Rovers’ frustrations to increase due to Doncaster’s defiant defence.

The second attempt on goal for Rovers in the first half came from right wing-back Paul Caddis, who was making his home debut for the club. The 29-year old received the ball on the right hand side and cut inside. This led to a tame left footed effort that harmlessly rolled towards Doncaster keeper Ian Lawlor. Rovers’ third chance at breaking the deadlock came off of a free-kick. The set-piece was floated into the box by Peter Whittingham, but was subsequently cleared by the onrushing Donny keeper. Correspondingly, the clearance was latched onto by Richie Smallwood who had opened his account for the club at Coventry during the week; however the midfielder was unable to replicate his strike from midweek as the ball deflected out for a Rovers corner.

Following a poor first half, both sides entered the break level despite Rovers boasting the match stats in their favour. However unsurprisingly, the second half caused Rovers to rue their missed chances and lack of penetration during the first period.

The Blues were slow out of the starting blocks following the break and they never really got going throughout the game as their attacking play seemed rather meaningless and lethargic and like the majority of the games last season, it only took an opposition goal, for Rovers to actually put some good play together. Early on in the second half, as a result of Doncasters’ pressing, Charlie Mulgrew was forced to pass backwards towards Elliott Ward. The centre-half, made a calamitous error as he failed to control the weighted pass from Mulgrew and due to the press which Doncaster instilled during the first few minutes of the 2nd half, John Marquis was able to steal the ball from the defender, charge through on goal and put Donny in front after being relatively unchallenged, despite Ryan Nyambe’s best attempts at tracking back.

This played perfectly into the hands of the visitors, who from minute one, had set up with a counter attacking intent, which was shown by their lack of efforts and defensive stability during the first 45 minutes of the game and despite their next two goals, which came as a result of well worked counter attacks, they didn’t show much else in the way of an out and out attacking threat. The game then petered out into a constant cycle of Rovers attempting to break down a defiant Doncaster defence, with each Blackburn attack resulting in a potential opportunity for the visitors as a result of Rovers’ defensive frailties.

Despite Rovers’ resistance – and their introduction of substitutes Bradley Dack and Dominic Samuel – Doncaster doubled their lead through a James Coppinger penalty, which he coolly despatched down the middle in the 67th minute. Following a Rovers attack that broke down, Doncaster broke with a 3 on 2 situation in their advantage. Donny’s captain James Coppinger powered through towards the Rovers goal until he was adjudged to have been taken down illegally by Rovers’ captain Charlie Mulgrew, who had successfully caught up with the Doncaster stalwart. As a result, the former Celtic man was booked and Coppinger scored the penalty, which put the visitors’ two goals to the good.

Rovers’ best chance of the second half came on the 70th minute mark as Ben Gladwin presented himself to the Ewood Park faithful after coming off the bench to make his debut. The former QPR man picked the ball up on the left hand side of the field and cut inside, releasing a venomous shot towards the goal; however an impressive save by Ian Lawlor denied the Blues a route back into the game.

The final nail in the coffin came in the 82nd minute as a result of another devastating Doncaster counter attack. Rovers overloaded their players into the box, leaving only Ryan Nyambe and Elliott Ward as the covering defenders – both of which had looked extremely vulnerable throughout the game, especially after Ward’s mistake which led to the first goal. The ball was then punted long by Doncaster towards Alfie May; consequentially David Raya came rushing off his line in an attempt to clear the ball. However the Spaniard’s poor header fell straight to the feet of May, who took a touch to compose himself before slotting the ball home past a hapless Ryan Nyambe, as he attempted to block the effort.

Following Doncaster’s third goal, Ewood Park’s atmosphere turned toxic; with garish boos which developed into a mass exodus by the home fans, who left the ground irate at their teams’ performance. However those who had left early in frustration were to miss the one thing they came to see; a Blackburn goal.

Ryan Nyambe collected the ball on the right wing and crossed the ball into the box. The ball, which deflected off of Doncaster’s Danny Andrew, fell straight onto the head of Dominic Samuel, who only had to guide the ball into the back of the Doncaster net; which put a dampener on their away performance.

The loss has left Rovers boss Tony Mowbray with a lot of thinking and preparing to do before Rovers travel away to Valley Parade to face Bradford City on 19th August. However the fans that do make it to the fourth game of the season off the back of watching this performance will be hoping for some much needed improvement, in both the result and the performance; especially before the East Lancashire Derby. In retrospect, Rovers received what they deserved out of this game following their incredibly lacklustre performance, as they were the mastered their own downfall following a string of individual errors coupled with their failure to breakdown Doncaster’s defence.